EASTER DEVOTION (2); plus PRAYER FOR SRI LANKA
By Elizabeth Kendal

Isaiah's first servant song (Isaiah 42:1-9) makes no mention of the servant's suffering, though the second (49:1-7) does describe him as 'one deeply despised, abhorred by the nation'. The third servant song (50:4-9) reveals God's servant as a disciple par excellence. 'Morning by morning' he meets with God who gives him 'the tongue of those who are taught', that he might 'know how to sustain with a word, him who is weary' (v4). Not only does he obey the word of God, but when God reveals his will to his servant's ear, the servant willingly submits - he is 'not rebellious'; he 'turns not backward' (v5). 'I [God's servant] gave my back to those who strike, and my cheeks to those who pull out the beard; I hid not my face from disgrace and spitting' (v6). He submitted himself to the path of suffering fully confident that his ever-faithful God would both help and vindicate him (v7).

The scene in the courtroom is extraordinary (v8,9). The servant himself issues the challenge: 'Who will contend with me? ... Who is my adversary? ... who will declare me guilty?' The prosecutors have no case, for the servant is innocent, sinless, holy and God the judge has vindicated him. This is why death could not hold him. This is why his death can be credited to others. What now of his accusers? 'Behold,' declares the servant, 'all of them will wear out like a garment; the moth will eat them up' (v9). 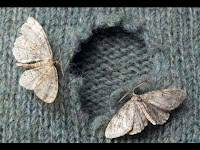 While commentators mostly surmise that Christ's accusers and adversaries will 'waste away', I prefer to envisage them being nibbled away by those they view as inconsequential pests! Ultimately, Christ's accusers and adversaries will be so full of holes, so lacking of substance, that everyone will simply see right through them. Their demise, however, will not be instant, spectacular or cataclysmic. On the contrary, it will be slow and quiet, requiring patience and perseverance. Ultimately, however, as noted last week [RLPB 543 (1 April)], 'the nations will see justice and salvation will extend to the ends of the earth.'

Today, as we approach Easter, conscious of the scourge of persecution; sickened by the lies that ruin lives; anxious about the threat of Easter terror, let us remember: Jesus, God's servant, has been vindicated. Consequently his adversaries have nothing and their demise is certain. So, dear intercessor, pray with confidence inspired by the promise that all Christ's adversaries 'will wear out like a garment; the moth will eat them up'. God has ordained it, Christ has secured it and now the Spirit is faithfully bringing it to pass.


On Resurrection Sunday 21 April 2019, suicide bombers affiliated with Islamic State perpetrated the most deadly terror attack ever witnessed in Sri Lanka [RLPB 499 (24 Apr 2019)]. The string of eight near simultaneous suicide bombings - in which three churches were targeted - claimed the lives of more than 253 people, around 180 of whom were killed while at worship. Hundreds more were wounded and, according to the Archbishop of Colombo, at least 176 children lost either one or both of their parents that day. The attacks deeply rattled the fragile nation [RLPB 500 (01 May 2019)].

As noted in RLPB 500, 'the danger in Sri Lanka now is that the Easter terror attacks will trigger a resurgence of violent religious nationalism'. This has indeed been the case. In November 2019, the divisive and controversial Sinhalese Buddhist nationalist Rajapaksa clan regained power in Sri Lanka [RLPB 530 (27 Nov 2019)]. On 2 March President Gotabaya Rajapaksa dissolved parliament and called for parliamentary elections to be held on 25 April. The plan was to run the election campaign through the Easter period and whip up Buddhist nationalist fervour during the first anniversary of the terror attack. By this means, the pundits surmised, Prime Minister (PM) Mahinda Rajapaksa - who currently leads a minority government - should be able to secure a strong majority, preferably the two-thirds majority he needs to amend the constitution and enhance the PM's powers. While the COVID-19 pandemic has laid waste to plans for an early election, the Rajapaksas' plan to fuel and fan ethnic-religious tension and whip up Buddhist nationalist zeal for political gain, is destined to continue until the elections are held later this year.

On 26 February PM Mahinda Rajapaksa addressed the Annual Convention of the All Ceylon Buddhist Councils. He identified what he maintains are the two greatest 'threats facing the Sinhala Buddhist Nation': (1) the drugs being peddled to school children and (2) the conversion of 'traditional Buddhist families to other religions'. He hinted of plans to revive the controversial anti-conversion bill and urged the Buddhist Councils to give him unanimous support. Buddhist nationalists have been pressing for a law criminalising conversions for almost 20 years. Draft bills have proposed prison terms and fines for anyone found guilty of 'forcing' anyone to convert. The main obstacle in the extremists' path has been the Supreme Court and the lack of consensus among Buddhists. On 28 February, the report of United Nations Special Rapporteur Ahmed Shaheed was distributed to the 43rd session of the Human Rights Council in Geneva. The report is highly critical of the Sri Lankan government for its lack of respect for religious freedom - specifically the right to propagate religion - for its unwillingness to act against violent Buddhist extremists, and for its continuous patronage of Buddhist nationalist hardliners.

'It is essential,' said the Special Rapporteur, 'for the Government to not ignore the simmering tensions and intolerance and the damaging consequences of incitement to hatred and violence in a country that has gone through a long period of internal conflict. Inaction by the authorities could aggravate the simmering tensions and, if these were left unattended, Sri Lanka may risk being locked in a vicious cycle of ethno-religious violence.' While the Sri Lankan government rejects the report as 'inaccurate', intolerance is escalating as Buddhist nationalist zealots grow in confidence. A horrific attack on a house church and their visiting pastor in Polonnaruwa district on 2 February left three believers hospitalised. Though a senior police officer and a local government official were present, none of the militants or the monks who led them have faced any sanction. As noted by the UN Special Rapporteur, 'The culture of impunity in Sri Lanka has been repeatedly pointed out as one of the main reasons for which religious extremism and hate speech thrive in the country, undermining the rule of law and human rights' (Report: A/HRC/43/48/Add.2).

EASTER TERROR: This Sunday - Resurrection Sunday on the Western Church calendar - Sri Lankan Christians will celebrate the resurrection while remembering the day, 12 months ago, when terrorists slaughtered their loved ones. They will not be alone; Christians in Pakistan [RLPB 350 (30 March 2016)] and Egypt [RLPB 402 (12 April 2017)] will also be remembering loved ones lost in recent years to Easter terror.

* comfort, sustain and protect the Church in Sri Lanka; may Sri Lanka's believers 'shine as lights' (Philippians 2:15) in spite of their grief and trauma; may they all grow in faith, hope and love, as well as grace and confidence as they trust in our Lord Jesus Christ.

* move in the hearts and minds of those who hold power and influence in Sri Lanka, so they might promote unity over division, peace over conflict, and equity, justice and religious freedom over and above self-interest. Lord, we pray for a breakthrough!

* intervene to protect his Church against Easter terror; we pray especially for local churches and house churches serving vulnerable, counter-cultural minority Christians who do not have the benefit of state support or state-provided security. May the Lord be their strength and shield (Psalm 28:7); may all believers put their trust in him.

On April 12 - Resurrection Sunday on the Western Church calendar - Sri Lankan Christians will celebrate the resurrection while remembering the day, one year ago, when terrorists slaughtered their loved ones. (They will not be alone: Christians in Pakistan and Egypt will also celebrate the resurrection while remembering loved ones lost to Easter terror.) After the attacks, Sinhalese Buddhist nationalism escalated, fuelled and fanned by ambitious politicians, in particular the Rajapaksa clan. Having grasped power, the Rajapaksas continue to whip up Buddhist nationalist zeal, aiming to increase their power. Having identified illicit drugs and religious conversions as the two greatest 'threats facing the Sinhala Buddhist Nation', Prime Minister Mahinda Rajapaksa has hinted that he will pursue anti-conversion legislation. As long as persecutors are guaranteed impunity, Sri Lanka risks descending into ethno-religious conflict. Please pray.

See www.ElizabethKendal.com
Posted by Elizabeth Kendal. at 1:18 AM