CHRISTIAN CRISIS IN THE MIDDLE EAST
By Elizabeth Kendal

In any conflict, explains Australian author Denis Dragovic, the wealthy are the first to flee. Then, as life becomes intolerable, the middle class flee across borders into camps where they wait in hope that the fighting will end and they will be able to return to their homes and businesses. When the fighting doesn't end, they seek alternatives, including the services of people smugglers. 'In the case of Syria ... ,' says Dragovic, 'we are now in that last phase.' Lacking resources, the poor have little choice but to stay and watch their children grow up traumatised, brutalised and without stable education. When peace comes, says Dragovic, the fighters are rewarded with top jobs while the traumatised poor have little to offer, making reconstruction virtually impossible. At this point the protagonists -- neo-Ottoman Turkey, Saudi Arabia, Iran, al-Qaeda and ISIS -- will doubtless fight to fill the void.

Like many analysts, Dragovic maintains that a more sustainable solution is to 'better resource the front-line countries, Turkey, Lebanon and Jordan, while putting pressure on Saudi Arabia and the Gulf states to accept asylum applications'.

[Despite fuelling the conflict, Saudi Arabia and the Gulf Arab states have taken in ZERO Syrian (Arab Sunni Muslim) refugees.]

A Europe struggling with demographic decline might hope to benefit from an influx of skilled migrants. However, the mass inflow of an alien culture brings with it huge risks. Parallel societies will consolidate and racial-religious tensions will escalate. This will most certainly end badly. Muslims (generally) are aware of Muhammad's alleged prophesy that Islam would first conquer Constantinople, the capital of eastern/Byzantine Europe, (which it did in 1453) and then Rome (the capital of western/Latin Europe). Islamic fundamentalist ideologues and militants are certainly aware of it and doubtless are deliberately hastening it.

Australia has promised to take more refugees, specifically family groups belonging to 'persecuted minorities in camps'. On one hand, it is very exciting to hear it finally acknowledged that Christians are facing an existential threat. Muslim, human rights and Opposition groups are rejecting the policy as 'discriminatory', which is untenable as Arab Muslims are clearly not facing elimination. The policy is needs-based. On the other hand, the Australian and UK commitment to only take refugees from camps is problematic, for, as Lord Carey recently pointed out, the Christians are generally not in the camps. This has long been the case -- the camps are simply too dangerous for religious minorities. Consequently Christians seek refuge in monasteries, churches and Christian schools. From there, most either share rental properties or are billeted out to local Christian families. Thus the local church carries the burden, not the UN. The global Church needs to share this load and send aid to the churches that are caring for refugees, but only through recognised Christian agencies.

Whilst multitudes of Christian youths and families are understandably desperate to leave the Middle East, their pastors and priests are understandably desperate for them to stay. 'The almost communal wave of youth emigration, especially in Syria, but also in Lebanon and Iraq breaks my heart, wounding me deeply and dealing me a deadly blow,' laments Melkite Greek Catholic Patriarch Gregorios III. 'Given this tsunami of emigration ... what future is left for the Church? What will become of our homeland? What will become of our parishes and institutions?' he asks as he appeals to Christians to stay. Many Christian leaders believe the temptation to flee must be resisted, as the Christian exodus only serves to facilitate the Islamic agenda of a total religious cleansing of the Middle East. But Christians will only stay if they are secure.

In Syria, Christians are only secure in the 20 percent of the country still under government control. Instead of taking directions from regional powers Turkey, Saudi Arabia and Iran -- all state sponsors of terror -- the West should prioritise protecting minorities and working in their interests, so that Christians might be safe in Christianity's historic heartland. To do that, the West might need to swallow its pride and talk to Assad and to Russia. Ever since the Crimean War (in the 1850s) the Islamic powers of the Middle East have exploited their geo-strategic position and played the West off against the East to advance their own ends. Ever since the Crimean War the West has backed Muslims at the expense of persecuted Christians. Surely the time has come for the West to be astute, identify the real enemy and put an end to this ruse, for the sake of imperilled Christians. 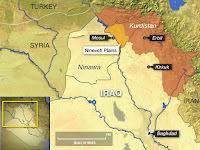 The Christian crisis in the Middle East is existential. Of course Christian families should be rescued, but the greatest need of all is for a safe haven in the Middle East where Christians can preserve their heritage and culture and worship freely while educating their children in liberty and security. Around the time of World War One, as the Ottoman Empire unravelled, Assyrians sought to establish an independent free Assyria. [This story is now being told through the film, 'A Man Before his Time: The Unsung Story of Freydun Atouraya.'] More recently the appeal has been for an autonomous region in the ancient Assyrian homeland of the Nineveh Plain. Each appeal has triggered a massacre and today most Western politicians dismiss the prospect of an autonomous Assyrian province in northern Iraq as impossible. But the Assyrian hope lives on, fuelled by faith and rooted in the promise of God as found in Isaiah 19:23-25. As God is faithful, it will come to pass! And in that day, the Lord of hosts will say, 'Blessed be Egypt my people, and Assyria the work of my hands, and Israel my inheritance' (v25 ESV).

* the Lord of Hosts will intervene on behalf of each imperilled believer in the Middle East -- may those requiring rescue be rescued and those who want to stay in their homeland have sanctuary.

* God will intervene personally on behalf of each monastery and church sheltering and caring for Christian refugees; may the Lord raise all the necessary funds and give a voice to the voiceless.

* the Lord Almighty will secure justice and liberty for his precious people and the Lord of Hosts be their defence.

* the Holy Spirit will flood the hearts of all pastors, priests and Christian religious workers across the Middle East that they will know his love, grace and comfort; may their faith remain strong and their hope not fade; may the Lord bless them for their faithful service.

* our faithful God will intervene to establish 'the work of [his] hands' -- an autonomous Assyrian province in northern Iraq. And may all the glory go to him.

A mass migration is under way as Syrians stream into Europe via Turkey. This is lessening Syria's prospects for reconstruction and is devastating its Church. Whilst multitudes of Christian youths and families are understandably desperate to leave the Middle East, their pastors and priests are understandably desperate for them to stay -- something they will not do without security. While some Christian families do need to be rescued, it is critical that a safe haven be established in the historic Christian heartland. Assyrians have sought this since World War One. Though most Western politicians dismiss this as impossible, the Assyrian hope lives on, fuelled by faith and rooted in the promise of God as found in Isaiah 19:23-25. May Christ intervene for his people and build his Church.


Elizabeth Kendal is the author of
Turn Back the Battle: Isaiah Speaks to Christians Today
(Deror Books, Dec 2012).

Her second book, 'After Saturday Comes Sunday: Understanding the Christian Crisis in the Middle East,' will be published by Resource Publications (an imprint of Wipf and Stock, Eugene, OR, USA) in early-mid 2016.
Posted by Elizabeth Kendal. at 12:29 AM