* INDIA (RLPB308), where hindutva ideologues spread hindutva (Hindu nationalist) propaganda -- which vilifies Christians as treacherous and a threat to social cohesion and national security -- to incite and fan the flames of religious hatred. The result is religious apartheid justified by an ideology of Hindu supremacy. Pray for India's vulnerable Christians.

* SUDAN (RLPB 309), where Pastors Michael Yat (49) and Peter Yen Reith (36) are on trial, charged with serious crimes against the state. The charges, which are totally without foundation, amount to nothing but racial-religious persecution from a regime determined to drive South Sudanese Christians from the country. The prosecution will continue making its case on Sunday 31 May. Pray for justice, and for the Church in Sudan.

* BURMA / Myanmar (RLPB 310), where the Christian Kachin of northern Burma continue to suffer extreme racial and religious hatred-inspired violence at the hands of the Burmese military. World Watch Monitor has released a 10:55 minute video report on the regime's war against the ethnic nations, by highly esteemed veteran Christian journalist Vishal Arora. Highly recommended.

On 25 April seven Christians were arrested in Assela, 100 miles south of the capital, Addis Ababa, and charged with holding an illegal meeting. However, the church is registered, having fulfilled all the legal requirements. Assela is in the restive Oromia region, which is 47.5 percent Muslim and 48 percent Christian (30.5 percent Orthodox, 17.7 percent Protestant), with most Christians living in urban areas and most Muslims living in rural areas. The global trend in Islam towards Wahhabi (Saudi Arabian) Islamic fundamentalism has seen Ethiopia's Muslims grow increasingly assertive over recent decades, posing problems for the government.

The Meseret-Kiristos Church gathered in Assela on 25 April to baptise 40 new believers. Of the seven Christians arrested, three were church leaders and four were newly baptised Muslim Background Believers (converts). Ethiopia has religious freedom, so when the authorities want to intimidate a church, they need to find another pretext -- hence the false charge of an illegal gathering. World Watch Monitor reports that the believers were incarcerated in appalling, over-crowded, unsanitary conditions until 11 May, when church leaders got together and paid for the men to be released on bail. Soon after being released, one of the believers named Aman Kuni was seized by gunmen who ordered him to kill pastors Girma Hippo and Endezina. The gunmen promised Kuni that if he did as instructed, they would reward him with a new life overseas, but if he had not obeyed within three months they would kill his three children. Pray for Ethiopia and for her Church.

NINEVEH, Iraq: When Islamic State (IS/ISIS) fighters swarmed east across the Nineveh Plains, northern Iraq, in August 2014, Assyrian Christians fled for their lives with only the most elderly, disabled, frail and infirm remaining. Reportedly IS recently executed an elderly Assyrian woman in Karamlis, an Assyrian village 30km east of Mosul and just 5km north-east of Qaraqosh (Bakhdede). The 80-year-old was reportedly burned alive for failing to comply with Sharia Law: for breaching the Dhimma agreement and therefore forfeiting her right to 'protection' from slaughter. 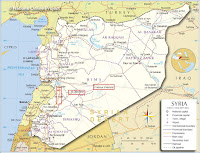 HOMS, Syria: By 20 May Islamic State (IS/ISIS) had seized control of Palmyra in Homs Province in eastern Syria. According to as yet unconfirmed reports, more than 400 people were executed over the next four days (Stratfor Global Intelligence). [217 executions, amongst them 67 civilians (including 14 children) have been confirmed and documented.] On 21 May unidentified jihadists kidnapped Jesuit priest Jacques Mourad and a co-worker from the Mar Elian Monastery in Qaryatayn, which is hosting many refugees from Palmyra. Qaryatayn is a small town 100km south-west of Palmyra, midway between Palmyra and Damascus. There can be little doubt the militants will ultimately move to sever the M5 HWY between Damascus and Homs. The director of the Jesuit Refugee Services for the Middle East, Father Nawras Sammour, told Aid to the Church in Need, 'We priests are fully aware of the risks we run, but we cannot do otherwise than remain alongside the Syrian people, both Christians and Muslims. In many cases we are the only ones they have to turn to.'

HASSAKEH, Syria: Assyrian and Kurdish fighters backed by the Syrian Arab Army have made gains in Hassakeh Province, north-eastern Syria, thanks in part to US-led coalition airstrikes. According to Father Emanuel Youkhana, who heads the Christian Aid Program Northern Iraq (CAPNI), 'All the villages along the Khabur River have been liberated.' He told veteran Middle East journalist Dale Gavlak that while priests have returned to ring the church bells the villages are still not safe for residents as mines still have to be cleared. On 25 May IS released two frail elderly women from amongst the Assyrians they abducted from along the Khabur river on 23 February but 229 remain in IS captivity.

* NIGERIA: TRAUMA IN THE NORTH

Muslim Fulani continue to make territorial gains across Nigeria's ethnic-religious fault-line, often with the support of Islamic militants. The situation for Christians in religious 'fault-line' Local Government Areas (LGAs) is perpetually perilous. Morning Star News (MSN) reports that a series of Fulani night raids in Riyom and Barkin Ladi LGAs in Plateau State in early May saw more than 60 Christians killed and hundreds displaced. Furthermore, Boko Haram rebels are retaliating against government advances in Borno State by attacking mostly Christian communities further south. On Friday 22 May, Boko Haram jihadists slaughtered 10 Christians with machetes in a pre-dawn raid in Pambula-Kwamda, a Christian community in Adamawa State's Madagali LGA. MSN reports that it was the third attack against Christian communities in Adamawa in six days and brought the death toll to 29. It is no exaggeration that in parts of northern Nigeria the Church has been decimated. Pray for the Church in Nigeria.

* PAKISTAN: YET ANOTHER BLASPHEMY RIOT

On Sunday evening 24 May, Sayed Zeeshanul Haq (a Muslim) noticed that Humayun Masih (a Christian) was burning paper that appeared to have verses of the Qur'an on it. Haq complained to the police who registered a blasphemy report against Humayun Masih (27) under section 295-B of the Pakistan Penal Code. When the police went to arrest him, they found a crowd of Muslims had gathered, eager to burn Humayun to death. After Humayun was taken into police custody, Muslim clerics led the mob to Dhup Sarri, Sanda area in Lahore, the Christian district where Humayun Masih lives. Christians fled for their lives as the mob fired weapons into the air, vandalised the church and looted at least 15 Christian homes to cries of Allah Akbar (Allah is greater). Police tried to intervene but were pelted with rocks. Two companies of Punjab Rangers were sent to the area to restore peace. After the Deputy Inspector General Operations received a head wound, a baton charge was ordered and the riot put down using tear gas. Five police officers were wounded. Humayun Masih is a known drug addict who has spent three years in a psychiatric hospital. Whilst he probably has little idea about what is happening, the Christian community understands their future is in the balance. Pray for the Church in Pakistan.

Tanzania's constitutional referendum scheduled for 30 April was postponed because of tensions over the issue of giving constitutional recognition to Kadhi (Islamic) courts. President Jakaya Kikwete (a Muslim) maintains that constitutional recognition of Islamic courts is nothing to worry about. However, church leaders insist it would undermine Tanzania's secular status, especially as the bill states that Kadhi court rulings would be enforced and could not be appealed or referred to the High Court. Unsurprisingly, most church leaders are advocating a 'No' vote, which has drawn the ire of the government. In late April the government threatened to investigate religious institutions and identify those 'meddling in politics' so as to close them down.

In the first week of May Barnabas Fund was informed that three pastors on Mafia Island were summoned to present themselves at a district level registration office along with their personal identification papers and church registration details. Church leaders are concerned that if the government strategically diffuses the harassment by having it take place at the local level rather than from the top, it will make it more difficult to address. Tanzanians go to the polls on 25 October to elect a new president and parliament. A new date for the constitutional referendum will be announced after voter registration has been completed. Religious tensions are escalating.


Elizabeth Kendal is the author of
Turn Back the Battle: Isaiah Speaks to Christians Today
(Deror Books, Dec 2012).
Posted by Elizabeth Kendal. at 8:12 PM