LIBYA-EGYPT: A CALL TO JIHAD AGAINST COPTS 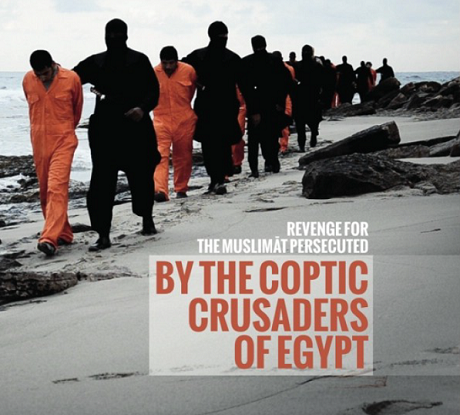 On Thursday 12 February, after Islamic State (IS) published issue 7 of DABIQ (the official IS propaganda magazine), its photographs of 21 Copts (native Egyptian Christians) dressed in orange prison suits on a Libyan beach went viral on social media. The Copts in the photographs were those referred to in RLPB 294 (28 Jan 2015).  The fate of the Copts was unclear as the article did not say they had been executed. On Friday 13 February the families of the pictured Copts demonstrated in Cairo. Egyptian President Abdel Fattah el-Sisi ordered that urgent assistance be rendered to Egyptians wanting to be evacuated from Libya. A committee established in January to investigate the kidnapping of the Copts stepped up efforts to clarify the situation and uncover their fate.

On Sunday 15 February Islamic militants associated with Islamic State's Wilayat Tarabulus (vilayet / province of Tripoli) released a video showing the 21Copts being beheaded simultaneously. It is IS's largest mass beheading and the first such terror statement to be performed outside the IS 'Caliphate' in Upper Mesopotamia. The footage, entitled, 'A message signed with blood to the nation of the cross,' opens with a scrolling caption referring to the hostages as 'People of the cross, followers of the hostile Egyptian Church'.

Before the killings, the militant spokesman, standing with a knife in his hand, declares in a North American accent: 'All crusaders: safety for you will be only wishes, especially if you are fighting us all together. Therefore we will fight you all together until the world lays down its burdens and Jesus, peace be upon him, will descend, breaking the cross [symbol of Christians], killing the swine [food of Christians] and abolishing jizya [protection money for Christians -- signalling the end of 'protection'] [see Hadith]. The sea you have hidden Sheikh Osama Bin Laden's body in, we swear to Allah we will mix it with your blood.' The 21 Copts are then laid face-down on the sand and simultaneously beheaded. The militant spokesman then points northward across the Mediterranean and declares: 'We will conquer Rome, by Allah's permission.' Meanwhile, a scrolling caption on the video states: 'The filthy blood is just some of what awaits you, in revenge for Camilia and her sisters.' As soon as the footage was verified as authentic, Egypt's President Sisi announced seven days of national mourning. Egypt's military response has begun.

The reference to 'Camilia' refers to a lie propagated by Islamic propagandists. When Camilia Shehata went missing in July 2010, her husband (a Coptic priest) reported her disappearance to the police, frantic that she might have been kidnapped by Islamic fundamentalists for forcible conversion. His fear was reasonable as this is a well documented common occurrence in Egypt, practised by Islamists in co-operation with fundamentalists in the security forces and local government. As it turned out, Camilia had simply gone to stay with relatives in Cairo after she and her husband had argued. When she returned home with police, Islamists propagated the lie that Camilia had converted to Islam only to be forcibly re-converted by the Church which was now holding her against her will. To quell the rumours, Camilia appeared on national TV declaring that she had never converted to Islam but that did not appease the Islamists. Just like the blood libel lie (which claims the Jews use the blood of Christian children in their rituals) has been used to incite hatred and violence against Jews, the Camilia lie is being used to incite hatred and violence against Copts. The Islamic State of Iraq (ISI) used the Camilia lie to justify its deadly 31 October 2010 siege and bombing of a Chaldean Church in Baghdad which claimed the lives of 58 Chaldean Christians and left more than 70 with terrible injuries. [See RLPB 082 (17 Nov 2010).]

The article in DABIQ asserts that, like the October 2010 attack on the Baghdad church, the capture of the 21 Copts in Sirte, Libya, was 'executed in revenge for Kamilia Shehata, Wafa Constantine, and other sisters [i.e. Muslim women] who were tortured and murdered by the Coptic Church of Egypt'. It says that while 'the kuffar' (unbelievers / Christians) are divided and hostile towards each other, they 'have allegiance to each other in the face of Islam'. Consequently, revenge may be taken on any Christian 'anywhere in the world'.

DABIQ criticised al-Qaeda head Ayman al-Zawahiri (an Egyptian) for his ruling that Copts should not be targeted as the battle is against America and because the Copts are 'our partners in this nation [Egypt], partners whom we wish to live with in peace and stability'. It seems IS is offering to support Egyptian Islamists in a jihad against the Copts as a means of turning them against al-Qaeda and drawing them into the IS fold. The article states that IS in Iraq targeted the church in Baghdad as at that time there was no way to hit the Copts directly. Now however, IS has provinces (wilayats) in Sinai and Libya, 'allowing it to easily capture the Coptic crusaders'. The article then closes with the ominous call: 'Finally, it is important for Muslims everywhere to know that there is no doubt in the great reward to be found on Judgment Day for those who spill the blood of these Coptic crusaders wherever they may be found.'

Breaking News -- Tuesday 17 February: Libyan Herald and Stratfor Intelligence report that 35 more Copts have been kidnapped in Libya in locations controlled by Ansar al-Sharia and Islamic State. Libya’s internationally recognised government (now based in the eastern city of Tobruk) is participating with Egypt in airstrikes on the IS stronghold of Derna. But Libya Dawn, the Islamist group in control of Tripoli (Libya’s capital in the west), has vowed to retaliate against the airstrikes and given Egyptians 48 hours to leave the country.

* the 'God of all comfort' (2 Corinthians 1:3-5) will pour peace and comfort into the shattered hearts, families and communities of Upper Egypt as they mourn the loss of their loved ones. 'Heal me, O Lord, and I shall be healed; save me and I shall be saved, for you are my praise.' (Jeremiah 17:14 ESV)

* the Spirit of God will guide Egypt's religious and civic leaders (Christian and Muslim), including President al-Sisi, so there will be no jihad against the Copts; may the Lord intervene in Egypt and Libya so that any violence against the Church will be quickly contained and justice upheld (Isaiah 59:15b-19).

* the Lord Jesus Christ will redeem all suffering and build his Church in Egypt (Matthew 16:18); the Lord of Hosts (the commander of heaven's angelic hosts) protect and provide for his imperilled people.

On Sunday 15 February Islamic State (IS) released footage of the mass beheading of 21 Copts in Libya by soldiers of the Caliphate in IS's Wilayat Tarabulus (province of Tripoli). Referred to as 'Coptic crusaders' and 'people of the cross', they are executed it is stated in revenge for 'Camilia', a Coptic woman who Islamists falsely claim converted to Islam, only to be captured by the Coptic Church and forcibly re-converted. The story is a fabrication, a lie much like those used to incite violence against Jews. In a call that is doubtless aimed at inciting jihad against the Copts, IS has called for Copts to be killed 'wherever they may be found'. Another 35 Copts have been kidnapped in Libya. Please pray for Egypt, her Church and for Copts everywhere.