In June ISIS flooded into Nineveh, northern Iraq, and captured Mosul in a blitzkrieg, forcing thousands of Christians to flee for their lives. After a failed attempt to advance on Baghdad, ISIS consolidated in Mosul, declared a Caliphate covering north-east Syria and north-west Iraq, and renamed itself the Islamic State (IS). It then expelled Mosul's remnant Christians, who limped into exile with nothing but the clothes on their backs. 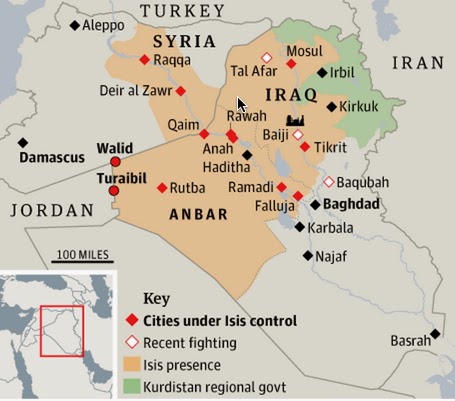 On Wednesday 6 August, as IS advanced towards Iraqi Kurdistan it overran Bakhdida, just 32km south-east of Mosul. It is the largest and oldest Assyrian city in Iraq and is also known as Qaraqosh or al-Hamadiniya [see RLPB 52 (5 May 2010)]. As in Mosul, the attack on Qaraqosh commenced with mortar fire and ended with expelling the entire Christian population. Richard Spencer reports from Ankawa, an Assyrian district on the northern outskirts of Arbil: 'The last day of Qaraqosh's time as a Christian town, a time almost as old as Christianity itself, began with a mortar shell at nine in the morning. It came through the roof of Melad and Marven Abdullah's house on Wednesday [6 Aug], killing them instantly. Melad was nine; his cousin, Marven, four. ... The family's next-door neighbour, Enam Eshoo, had popped in to deliver some fresh drinking water; she too died where she fell. The day ended with an order to evacuate. Within a couple of hours, the city's tens of thousands of inhabitants were crowding the road to Kurdistan ... .'

Archbishop Athanasius Toma Dawod of the Syriac Orthodox Church in the UK said that IS's capture of Qaraqosh had marked a turning point for Christians in the country. 'Now we consider it genocide  -- ethnic cleansing,' he said. 'They are killing our people in the name of Allah and telling people that anyone who kills a Christian will go straight to heaven: that is their message.' He said IS had burnt churches along with invaluable ancient books and manuscripts, and that some churches had been converted into mosques.

Patriarch Louis Sako, the Iraq-based leader of the Chaldean Catholic Church, issued a statement on 10 August through the Catholic charity 'Aid to the Church in Need'. He warned that Iraqi Christians 'are facing a human catastrophe and risk a real genocide'. According to the Archbishop, some 70,000 displaced Christians had arrived in Ankawa, Arbil. Some are with relatives, others have crowded into churches and monasteries and still more are sleeping in the streets and open fields in the scorching summer heat; their situation is dire. A further 60,000 Christians have arrived in Dohuk, 80km north of Mosul, 'and their situation,' he said, 'is even worse than those in Arbil.' Other Christians have travelled to Kirkuk, Sulaymaniyah and Baghdad. 'The churches are offering everything within their capacity.'


Archbishop Sako reports that all the churches from Mosul to the border of Kurdistan are deserted and desecrated. 'The level of disaster is extreme,' he said, lamenting that the US is only interested in protecting Arbil and not Christians facing genocide throughout Nineveh [and in fact across the whole 'Caliphate']. On the night of Thursday 7 August, US air strikes forced IS into a strategic withdrawal. US assistance will indeed be 'limited' -- limited to protecting US personnel and interests. The US, Turkey and Iran will all want to help the Kurds keep IS at bay, without enabling a future Kurdish declaration of independence. Archbishop Sako laments: 'The confirmation that this terrible situation will continue until the Iraqi Security Forces will fight along with Peshmerga [Kurdistan forces] against the ISIS militants is very depressing. There is no strategy to dry up the sources of manpower and the resources of these Islamic terrorists.'

Indeed, the Iraqi Security Forces will not be fighting terrorists in the north any time soon. When Iraq's newly elected parliament failed to elect a Prime Minister, and with most agreeing that the incumbent PM al-Maliki -- a polarising figure -- should not lead the next government, the president stepped in to resolve the crisis. Under the Iraqi constitution, the president may appoint the chosen nominee of the largest parliamentary bloc to form a government. On 11 August Iraqi President Fouad Massoum announced he had approved the nomination of Haider Abadi for PM. Al-Maliki immediately rejected this, insisting that it was his constitutional right to be nominated for a third term on the grounds that he heads the largest party in the largest bloc. Refusing to step aside, al-Makili has mobilised his troops, having spent his last eight years as PM consolidating his power by promoting military officials on grounds of loyalty rather than merit. So Baghdad fiddles while Iraq burns.

UPDATE: on Thursday 14 Aug, Nuri al-Maliki stepped aside after his own party turned against him. A new government will now work to unite Sunnis in what will be a long fight against IS.

PLEASE PRAY THAT THE 'LORD OF HOSTS' WILL INTERVENE TO --

* shield and protect Christians in their places of refuge. May the Lord have mercy on this traumatised and threatened remnant; may he protect and preserve them and eventually return them to their lands. (Isaiah 19:23-25)
[See Elizabeth Kendal's message in solidarity with Syrian and Iraqi Christians.]

* feed the hungry, heal the sick, house the homeless, comfort the distressed and defend the vulnerable. 'Truly, I say to you, as you did it to one of the least of these my brothers, you did it to me.' (From Matthew 25:31-46 ESV.)

* turn back the battle at the gate. 'So now, O Lord our God, save us from his hand, that all the kingdoms of the earth may know that you alone are the Lord.' (From King Hezekiah's prayer in Isaiah 37.)

[Please pray and give. Aid can be channelled through Catholic, Orthodox or Protestant charities or through any of the various persecuted church aid and advocacy groups. 'For as the body apart from the spirit is dead, so also faith apart from works is dead.' (James 2:26 ESV)]

Genocide is being perpetrated in Nineveh as Islamic jihadists purge the province of all who refuse to submit to Allah, cleansing the land of everything 'un-Islamic'. Mosul, Iraq's second largest city, has been totally ethnically and religiously cleansed. Qaraqosh, Iraq's largest Assyrian Christian city, has been totally purged. Archbishop Sako of the Chaldean Catholic Church reports that some 70,000 displaced Christians have arrived in Ankawa, an Assyrian district on the northern edge of Arbil in Iraqi Kurdistan, while a further 60,000 Christians have arrived in Dohuk, 80km north of Mosul. Others have travelled to Kirkuk and as far as Baghdad. Archbishop Sako says, 'The churches are offering everything within their capacity,' but the situation is dire. These churches are in desperate need of aid. Please pray and give. (Matthew 25:31-46)