As Nigeria's General Elections loom, one cannot help but feel a dreaded sense of déjà vu. Tensions soared and conflict loomed back in March 2015 as Muhammadu Buhari (a Fulani Muslim from the north) ran for the presidency against the incumbent Goodluck Jonathan (a Christian from the south). Feeding off and fuelling the northern Muslim desire for a northern Muslim president, Buhari warned that violence would erupt and blood would flow if he were denied the presidency. [See RLPB 295 (4 Feb 2015)] Christian fear escalated, especially through the Muslim-dominated North and volatile Middle Belt. As it turned out, Buhari won the 2015 presidential poll, in large part due to the influence of his running mate, Vice President Yemi Osinbajo who, as a senior pastor in one of Nigeria's largest Pentecostal denominations, influenced many Christians to vote for Buhari. When the results were announced, outgoing president Goodluck Jonathon conceded defeat with grace and dignity and appealed for calm in the national interest. [See RLPB 307 (29 April 2015)]

The fear that hung over the 2015 presidential poll was not unfounded. Previously, in April 2011, when Muhammadu Buhari lost the presidential poll to Goodluck Jonathon, Buhari immediately cried foul and claimed the polls (deemed free and fair) had been rigged against him. With that false claim Buhari triggered the worst outbreak of electoral violence in Nigeria's history. For three days Muslims rioted across the north, burning, looting and killing; it was a rampage of terror that cost the lives of more than 800 mostly Christian Nigerians.

For four years now, President Buhari's Fulani-dominated administration has favoured the Fulani at every turn. In early 2017, as the nation marked the 50th anniversary of the outbreak of the Biafra War, ethnic Igbo pro-secessionist groups in Nigeria's south-east escalated their activity in protest of the deepening marginalisation the Igbo were experiencing under the Buhari government. Fulani Muslim youths in the north responded by threatening to ethnically cleanse the 'ungrateful and uncultured' Igbo (a mostly Christian people indigenous to the south-east) from the north. [See Religious Liberty Monitoring (RLM), 'The Kaduna Declaration;Nigeria in the Shadow of Biafra' (6 July 2017).] While northern Muslim leaders did ultimately manage to pacify the northern Muslim youths and prevent bloodshed, ethnic and religious tensions have remained high. Many Igbo are convinced they simply cannot live in a nation dominated by Fulani and so continue to agitate for secession; some have called for a boycott of the 16 February polls. 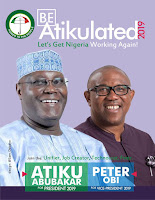 Consequently, it was very strategic of Atiku Abubakar, the presidential candidate for the opposition People's Democratic Party (PDP), to choose an Igbo man as his running mate. Peter Obi (57) served as Anambra State governor until 2014 and has been a leading figure in Nigerian politics ever since. A devout Catholic with a reputation for careful economic management, Obi is married with two children; his elder sister is a nun and his younger brother is a priest. No Igbo has been either president or vice-president since Alex Ekwueme was deputy to Shehu Shagari, who was ousted in December 1983 in a military coup led by then-general Muhammadu Buhari. Furthermore, Atiku's fourth wife, Barrister Dr Jennifer Atiku, a US-educated lawyer and Ibgo woman, is campaigning for her husband across the south-east. The Igbo will not boycott this presidential poll; rather, they will come out en masse to oust Buhari.

Election monitors are arriving in preparation for the big day. Meanwhile, two offices of the Independent National Electoral Commission (INEC) have been burnt to the ground in the space of a week -- one in Plateau (North Central / Middle Belt) and one in Abia (South East), resulting in the loss of thousands of permanent voters' cards (PVCs) and hundreds of ballot boxes. Further to this, a shipping container full of PVC readers and other electoral materials has been burned in Anambra (South East).  Foreign diplomats in Nigeria report they have never known such a flood of hate-speech, doctored photographs, falsehoods and accusations. Tensions are soaring and the threat of serious, widespread violence is very real. In a superb article by Jeremy Weber, with photography by Gary Chapman (Christianity Today, Nov 2018), the General Secretary of Nigeria's five million-strong Evangelical Church Winning All denomination, Yunusa Nmadu, gives voice to the widely held fear that Nigeria is teetering on the edge of civil war. 'We are on the precipice,' he warns. 'I am not a prophet of doom, but it looks like we are very close to it.'

As noted in last week's RLPB 488 (6 Feb), Buhari and his All Progressives Congress (APC) 'came to power in 2015 promising to tackle corruption, improve security and revive the economy. Instead, corruption has flourished, security has deteriorated to crisis levels and consequently the economy has stagnated. The result is widespread disillusionment, displacement and despair.' Indeed, Buhari's presidency is widely acknowledged to have been a total disaster. Any progress that was made was made in his absence, during his 'medical leave', when VP Osinbajo, a graduate of the London School of Economics, stepped in as Acting President. Consequently, when Nigerians go to the polls on Saturday 16 February, it is difficult to imagine that a majority would want to give Buhari another four years in office. It is also difficult to imagine that Buhari, should he lose the election, would concede defeat with grace and dignity and appeal for calm in the national interest; that would be a miracle! If Buhari loses (as is probable) it is more likely violence will erupt as it did in 2011, only this time it could well be much worse as there are far more firearms available now. In the event of violence, much will depend on the course that the demoralised Nigerian military ultimately takes.

* God, in grace and mercy, will intervene in Nigeria for the benefit of the Church and Nigeria's 'harassed and helpless' masses (Matthew 9:36): may the elections be free and fair, and may the results come with the miracle of peace. 'For nothing will be impossible with God' (Luke 1:37 ESV).

* the Spirit of God will awaken Nigerians to the reality that ultimately the remedy for corruption is not more law or more police, but the cleansing and transformation of the human heart -- something Islam does not offer, but the Lord Jesus Christ does. Pray for awakening throughout Nigeria.

* Jesus Christ, Yahweh Sabaoth (the Lord of hosts), will protect, preserve, sustain, encourage, bless and continue to build his Church in Nigeria; may the forces of darkness arrayed against her be frustrated as God fulfils his purpose for her to be a praying, missionary Church into the future.

Tensions are soaring ahead of Nigeria's General Elections slated for Saturday 16 February. The threat of serious, widespread violence is very real. Two election offices have already been burnt and hate-speech, doctored images and falsehoods are everywhere. Buhari's presidency is widely acknowledged to have been a total disaster. Consequently it is difficult to imagine that a majority will want to give him the second four-year term he craves. It is also difficult to image that Buhari would ever concede defeat and appeal for calm; that would be a miracle! If Buhari loses (as is probable), then violence likely will erupt as it did when he lost to Goodluck Jonathon in April 2011, only this time the toll could be much higher. Please pray for Nigeria and for her long-suffering Church.