PAKISTANI TALIBAN TARGETS THE CHURCH
-- and this could be just the beginning.
By Elizabeth Kendal

Christians comprise less than two percent of Pakistan's population of 180 million. For security, most choose to live in Christian communities or 'colonies'. With some 100,000 Christians, Youhanabad is the largest such 'colony' in Lahore, the capital of Punjab Province. Tensions have escalated in Youhanabad over recent years as local residents have grown concerned that Pashtuns -- a Muslim people from the north-west tribal areas (the Taliban heartland) -- have been moving into the area.

At 11:20 am on Sunday 15 March Rev. Irshad Ashknaz was serving the Lord's Supper to a large congregation in Christ Church (Protestant) Youhanabad when the service was interrupted by gunfire and a huge explosion. Outside, three young Muslim men had approached the church entrance: two firing guns from one side as a bomber approached from the opposite side. One volunteer security guard was shot dead and another was critically wounded before a third, Obaid Sardar Khokhar (32), overpowered the bomber. As Obaid dragged him away from the church entrance the suicide bomber detonated his vest. Minutes later three more young Muslim men approached the entrance of St John's Catholic Church, about 500m away, where Rev. Francis Gulzar was leading Mass for a large Catholic congregation. The attackers followed the same modus operandi: gunmen fired from one side as a suicide bomber attempted to scale the church's boundary wall from the other side. Volunteer security guard Akash Bashir (16) rushed at the suicide bomber and grabbed his legs. Unable to get over the wall, the suicide bomber detonated his vest. 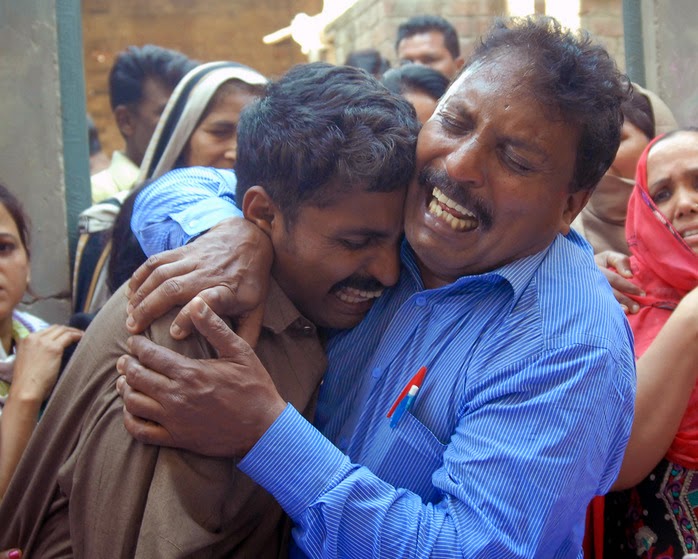 The police posted to guard the churches were busy watching cricket, leaving the churches' own volunteer guards to tackle the bombers. Had it not been for the selfless courage of Akash and Obaid (a husband and father, whose pregnant wife was shot dead in the attack), the suicide bombers would have entered the churches and then multitudes more would have died. As it was, 15 people died that day. The explosions were huge and the bombs so packed with shrapnel that more than 70 were wounded, 20 'critically'. Obaid and Akash will be remembered and celebrated as martyrs who laid down their lives for their brethren.

Traumatised by the attacks and infuriated by the lack of security, hundreds of hysterical young men of Youhanabad took to the streets. Two young men accused of being involved in the attacks were snatched from police custody and violently lynched. Police were manhandled, as were Christian lawmakers who had come to show support and call for calm.  Christian protests and smaller Muslim counter-protests erupted in numerous locations. On Monday 16 March, as police used water cannon to put down riots, two more bomb victims succumbed to their injuries, bringing the death toll to 17.  One was Khushi Masih (55), who had suffered critical head injuries. His family, including his eight children, had kept vigil in the corridor outside the ward reading the Bible and praying for a miracle, but it was not to be. With so many critically wounded the death toll is expected to rise.

Pakistan's Jamaat-ul-Ahrar faction claimed responsibility for the attacks. It reportedly split from the Taliban in the summer of 2014, pledging allegiance to Abu Bakr al-Baghdadi and the Islamic State (IS). However, the Pakistan government subsequently escalated its unofficial war against the Taliban in response to the Peshawar school bombing which claimed some 150 lives, mostly children. Suspects are being rounded up and those found guilty of terrorism offences are being sentenced to death by hanging with immediate effect. As strife intensified, Jamaat-ul-Ahrar announced it was rejoining the Taliban insurgency, declaring on 12 March: 'We warn the followers and defenders of the infidel democratic system of Pakistan that in any situation we will not let the conspiracies of the (infidel) Pak Army . . . succeed.' When claiming responsibility for the Youhanabad church bombings, Jamaat-ur-Ahrar added: 'We promise that until an Islamic system is put into place in Pakistan such attacks will continue. If Pakistan's rulers think they can stop us, they should try to do so.' This is pure terrorism aimed at forcing the Pakistan government to capitulate to the Taliban. Doubtless the IS call in DABIQ issue 7 (February 2015) for Muslims to kill Christians played a part in the selection of the targets. These bombings could be just the beginning.


PRAY THAT YAHWEH SABAOTH (THE LORD OF HOSTS) WILL:

* set a watch over the Church in Pakistan; may the hosts of heaven stand guard over every Christian community and surround every gathered assembly. 'Do not be afraid, for those who are with us are more than those who are with them.' (Elisha; from 2 Kings 6:15-19 ESV)

PRAY THAT THE GOD OF ALL GRACE WILL:

* pour out his Spirit in great abundance on the Christians of Pakistan so they know the love, peace and comfort of Jesus Christ; may they know that supernatural power that enables the persecuted to retain hope and show amazing grace (see Romans 12:14-21).

*open the eyes of Pakistani Muslims, many of whom are confused God-seekers, and may Christ-haters and those who plot evil be convicted of their sin. May the Lord Almighty turn back the battle in Pakistan.

On Sunday 15 March Taliban militants targeted two churches -- one Protestant, one Catholic -- in Youhanabad, the largest Christian community in Lahore, capital of Punjab Province. The churches' own volunteer guards tackled the bombers, giving their lives in the process of saving multitudes. As it is, 17 are dead and more than 70 wounded; 20 critically. The Islamic State-aligned Taliban offshoot, Jamaat-ur-Ahrar, claimed responsibility, saying the bombings were in response to the government's crackdown on Taliban militants in the north-west. Doubtless IS's call in February for Muslims to kill Christians influenced Jamaat-ur-Ahrar's choice of targets. As the struggle between the government and the Taliban intensifies, more terror attacks can be expected. Please pray that Yahweh Sabaoth, the Lord of Hosts, will guard and shield his precious Church in Pakistan.