'Scheduled castes' and 'scheduled tribes' are those deemed to be backward, requiring affirmative action and government benefits. India declared Independence in 1947. In the 1950s the Nehru government passed a law limiting the definition of 'scheduled caste' to members of the Hindu faith. The theory behind the law was that upon leaving Hinduism, converts would escape the constraints of caste and be free to rise above it. In reality, caste in India is like a stain that never washes out -- it is inescapable. Consequently, scheduled caste Hindus who convert to Christianity still suffer caste discrimination, yet without access to benefits or reserved job or university places, leaving them truly impoverished. Unfortunately, as Hindutva (Hindu nationalist) ideologues rightly note, caste discrimination extends deep into the Church. Christians have been appealing through the courts for more than a decade for benefits and reservations to be allotted equitably: according to need, not religion [RLPB 276 (2 Nov 2014)].  Hindutva, however, promotes religious apartheid and strongly opposes equity.

In 1976 the court ruled that if a Christian born to scheduled caste (Hindu) converts-to-Christianity, wants to 'return' (i.e. convert) to Hinduism and receive scheduled caste benefits, he/she should be free to do so. The ruling thus set a limit of one generation: i.e. a Christian 'returning' to Hinduism could claim the caste status his/her parents had prior to their conversion. In 2006 the Kerala High Court ruled against KP Manu, a 'returnee' to Hinduism. Manu's scheduled caste (Hindu) grandparents were the first in his family to convert to Christianity. Born to Christian parents in 1960, Manu 'returned' to Hinduism in 1984, claimed the scheduled caste status of his grandparents, and got a reserved government job. However, the local Hindu community did not accept him, suspecting him to be a fraud, as he did not participate in Hindu rituals. The Hindu community complained, saying Manu was not entitled to a reserved job because his parents were Christians. With that, Manu's job was terminated and he was ordered to pay back the salary he had earned. When the Kerala High Court upheld the termination, Manu appealed to the Supreme Court.

On Thursday 26 February 2015 the Supreme Court (SC) ruled in Manu's favour, setting aside the High Court judgment. It also extended the 1976 ruling, removing the one generation limit so that now any Christian 'returning' to Hinduism is guaranteed the caste of their ancestors along with the benefits. To receive scheduled caste status, converts need only prove they have an ancestor who was a member of that scheduled caste and that the community will accept them.

The SC ruling has sent shockwaves through the Christian community which has been lobbying for equity. The ruling consolidates inequity and the religious apartheid of Hindutva (Hindu nationalism). Furthermore, the court ruling legitimises the Hindu nationalist Vishwa Hindu Parishad's (VHP's) ghar wapsi ('homecoming' / 're-conversion') campaign, just as the VHP is escalating its efforts across the country. The SC ruling essentially establishes an incentive for impoverished Christians to 'return' to Hinduism. 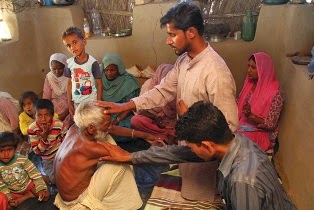 'Those who left the Hindu fold had made a mistake,' said BJP (Hindu nationalist) MP Yogi Adityanath. 'We are trying to rectify their mistake through ghar wapsi. Ghar wapsi shall continue until a law on religious conversion is brought in. ... If such a law was in place at the time of Independence,' he said, 'then the population of Christians would not have risen from a mere 0.7 per cent to seven per cent.' VHP president Pravin Togadia has expressed concerns that if Hindus [who comprise 72 percent] are not protected from 'forced conversion' they will become a 'minority in their own country'. He is calling for India to be made a Hindu Rastra (Hindu State) to 'protect Hindus from discrimination'. Meanwhile, Sadhvi Prachi Arya, a prominent VHP leader, has vowed that the ghar wapsi programme will continue until the 15 crore [150 million] people who, she claimed, have left the Hindu fold since Independence, are 'reconverted to Hinduism'. Nothing leaves impoverished Christians (the main targets of ghar wapsi) more vulnerable to 're-conversion' than the caste discrimination within the Church.

PRAY SPECIFICALLY THAT OUR MERCIFUL GOD WILL:

* pour out his Spirit of repentance, grace and courage upon the Church in India, eliminating caste discrimination within the Church, proliferating generous and sacrificial love for the Body of Christ.  '... for you are all one in Christ Jesus.' (From Galatians 3:23-29 ESV)

* raise up advocates who will 'speak up for those who cannot speak for themselves, for the rights of all who are destitute. Speak up and judge fairly; defend the rights of the poor and needy.' (Proverbs 31:8-9 NIV); may India's gross inequity and religious apartheid be denounced and challenged at home and abroad.

* comfort, provide for and greatly bless all those Indians who choose to trust and follow Christ in spite of the cost being violent persecution and crippling poverty.

'For you know the grace of our Lord Jesus Christ, that though he was rich, yet for your sake he became poor, so that you by his poverty might become rich.' (2 Corinthians 8:9 ESV)


ALSO - URGENT:  Please remember the more than 200 Assyrian Christians being held captive by IS in Syria and the 35 Copts being held captive by IS in Libya. Recently, the decapitated body of a Copt named Mansour Saad Awad was discovered on the outskirts of the town of Mechili, in Cyrenaica, eastern Libya. IS has issued threats against Copts in northern Sinai, ordering their expulsion from Wilayat Sinai (the IS province of Sinai). Some 30 Coptic families have fled their homes but between 200 and 300 Coptic families remain, having nowhere to go. Pray for the Christians of the Middle East.

Indian law mandates that only Hindus can be members of 'scheduled' castes who are eligible for government benefits and reserved jobs. On 26 February 2015 India's Supreme Court opened the way for Christians to convert to Hinduism and access scheduled caste benefits. Converts will need merely to prove they have an ancestor who was a member of a scheduled caste and that they have the support of the local Hindu community. For decades Christians have been fighting in the courts for equity: for government benefits to be available to the needy regardless of religion. The Supreme Court ruling consolidates the inequity and religious apartheid of Hindutva (Hindu nationalism) at a time when Hindutva forces are escalating their re-conversion efforts across the nation. Please pray for the Church in India.