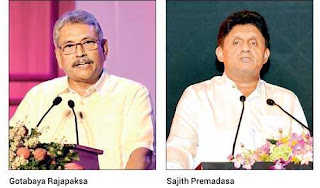 Sri Lankans will go to the polls on Saturday 16 November to elect a new president and in 2020 to elect a new parliament. The outcome of the presidential poll will have profound implications for the 2020 parliamentary poll. Though there are 35 presidential candidates, it really is a 'two-horse race' between the ruling United National Party (UNP) candidate, Sajith Premadasa [manifesto], and war-time Defence Secretary, Gotabaya Rajapaksa [manifesto], the candidate for Mahinda Rajapaksa's Sri Lanka Podujana Peramuna (SLPP, English = Sri Lankan People's Front, formed in 2016). Sri Lanka is 70 percent Sinhalese-speaking and 30 percent Tamil-speaking. Overall, Christians -- who are Sinhalese and Tamil -- comprise a little over 8 percent of the total population. On Resurrection Sunday 21 April 2019, Islamic terrorists staged a string of near-simultaneous bombings at three churches and three hotels popular with foreign tourists [see RLPB 500 (1 May)]. The bombings -- which claimed 253 lives -- left the Church and the nation deeply rattled. They also served to re-energise the forces of intolerant Sinhalese Buddhist nationalism.

The name 'Rajapaksa' is virtually synonymous with Sinhalese Buddhist nationalism. Mahinda Rajapaksa came to fame during his first term as president (2005-2010) when he, along with his brother, Defence Secretary Gotabaya Rajapaksa, crushed the Tamil Tigers (LTTE), ending years of civil war. Both Mahinda and Gotabaya Rajapaksa stand accused of war crimes. During Mahinda Rajapaksa's second term as president (2010-2015), corruption, nepotism, human rights abuses and violent Sinhalese Buddhist nationalism all escalated markedly. During this time, President Rajapaksa amended the constitution to remove presidential term limits. He thought Sri Lankans would not object -- but they did! In January 2015, Mirthripala Sirisena won the presidency, pledging to end corruption, nepotism and human rights abuses. Then, in parliamentary polls in August 2015, Sri Lankans elected a coalition cobbled together to break the power of the Rajapaksa clan. The coalition, known as Yahapalnaya ('good governance'), won only narrowly -- securing 51.3 percent of the vote -- and never delivered. Hoping to hamstring the ambitious and authoritarian Rajapaksas, the government amended the constitution to restore presidential term limits and limit presidential powers. Fatally strained, the coalition -- only ever a 'marriage of convenience' -- unravelled in October-November 2018. This is the main reason why, in early 2019, intelligence warning of a terror attack over Easter went unheeded. Sri Lankans feel disillusioned, insecure and angry -- a misery compounded by economic downturn as tourist avoid the island.


The failure of Yahapalnaya and the trauma of the Easter bombings have combined to set the stage for a Rajapaksa revival. While Gotabaya Rajapaksa is running for president, Mahinda Rajapaksa is eyeing the now more powerful post of Prime Minister, a presidential appointment. The Rajapaksas are running a 'populist' campaign based on Sinhalese Buddhist nationalism and national security. Recognising Sinhalese Christians -- most of whom live on the west coast, north of Colombo -- as a separate constituency, they are promising them security. Meanwhile, the UNP's Sajith Premadasa is campaigning on a platform of development, while promising to rein in corruption, drug-trafficking and 'religious extremism'.


Historically, in the absence of a Tamil boycott, Sri Lanka's ethnic and religious minorities have voted UNP. However, it seems the Easter terror attacks have left Christians so desperate for security that most are indicating they will switch from UNP and vote for Gotobaya Rajapaksa, despite the Rajapaksas' overt support for the militant Buddhist nationalists who have brought them so much grief in the past. Tamils and Muslims fear Gotabaya Rajapaksa and will never vote for him. Consequently, the minorities have been split and, quite possibly, the Christians will be split between those on the Buddhist-dominated west coast and those on the Muslim-dominated east coast. Furthermore, the nation is split vertically, between the pro-Sajith Premadasa (UNP) Tamil north and east, and the pro-Rajapaksa Sinhalese south and west. Both candidates are working hard to secure the votes of the Sinhalese Buddhist majority, while offering the minorities promises that are mostly undeliverable. Neither candidate is willing to condemn militant Buddhist nationalist violence.

No matter who wins the elections, Christians will probably face escalating persecution, especially in the strongly Buddhist nationalist south as well as in the rapidly Islamising Muslim-majority towns on east coast. If Christians vote Rajapaksa they will probably attract the wrath of other minorities (Tamil and Muslim). If they vote UNP they will certainly attract the wrath of the Rajapaksas. These are troubling times for the Church in Sri Lanka.

* bless and sustain Sri Lanka's churches and Christians; may the Lord shield them from deadly and destructive violence and provide all their needs.

* intervene in Sri Lanka so that hearts and minds will be open to the Gospel of Jesus Christ.

* move in the hearts of those with power and influence in Sri Lanka, to promote unity over division, peace over conflict, and equity, justice and freedom over self-interest.

'First of all, then, I urge that supplications, prayers, intercessions, and thanksgivings be made for all people, for kings and all who are in high positions, that we may lead a peaceful and quiet life, godly and dignified in every way. This is good, and it is pleasing in the sight of God our Saviour,  who desires all people to be saved and to come to the knowledge of the truth.' (1 Timothy 2:1-4 ESV)

On Saturday 16 November Sri Lankans will go to the polls to elect a new president. Sri Lanka is 70 percent Sinhalese-speaking and 30 percent Tamil-speaking. Christians -- Sinhalese and Tamil -- comprise a little over 8 percent of the total population. The current coalition government's failure and the trauma of the Easter terror attacks have combined to set the stage for a revival of intolerant Sinhalese Buddhist nationalism. Both leading presidential candidates are campaigning to secure the votes of the Sinhalese Buddhist majority while offering the minorities promises that are mostly undeliverable. Neither candidate is willing to condemn militant Buddhist nationalist violence. No matter who wins the elections, Christians will probably face escalating persecution, especially in the strongly Buddhist nationalist south and on the increasingly Islamic east coast. Please pray.

Posted by Elizabeth Kendal. at 8:42 PM