HONG KONG (CHINA): CRACKDOWN OR BREAKTHROUGH
Praying for a Miracle (an extended RLPB)
by Elizabeth Kendal 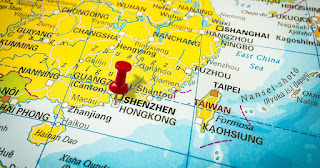 Home to 850,000 Christians (12.4 percent of the population (OMF)), some 1,500 churches and 35 Bible Colleges, Hong Kong has long been 'a vital nerve centre for [Christian] media' (Operation World 2010) and 'the springboard for evangelising on the mainland' (TIME magazine, March 2018). Indeed, the Hong Kong Church has long maintained that its primary role, in God's great purpose, is to support the mainland Church and its massive missions movement. 'Hong Kong,' writes TIME magazine's Laignee Barron, 'with its greater freedoms and religious liberties, has played a vital role in oxygenating the growth of Christianity on the mainland.' It does this, Barron explains, by maintaining 'a vital lifeline, supplying everything from monetary support, to Bibles, to blacklisted Christian literature, to training and assistance founding new churches. The gospel is smuggled over the border in every format imaginable: broadcast on pirate radio waves and disseminated through USB flash drives. "They need our help," says Hong Kong's retired Catholic Cardinal Joseph Zen, "because we are in the freer world and they are not".' This is but a snapshot of what is at stake as Hong Kong teeters on the precipice, faced with the prospect of a violent descent into non-freedom.

As noted in a hugely informative and important piece by Russell Hsiao for The Jamestown Foundation (31 July), the Chinese Communist Party (CCP) began strategically (and subversively) to extend its influence deep into Hong Kong well before the 1997 retrocession (when Britain ceded Hong Kong back to China). However, that process has accelerated markedly under President Xi Jinping, whose goal it is to complete the CCP's '100-year marathon' to end humiliation and 'restore' China to global dominance as the ruler of 'all under heaven' (tian xia). To this end Xi is fuelling the hostile, anti-foreign Chinese nationalism forged by the CCP in the wake of the Tiananmen Square massacre of 4 June 1989. By this means, Xi also hopes to perpetuate CCP power and privilege into the future. As the CCP's influence has increased, Hong Kong's cherished liberties and safeguards have diminished. The ill-considered extradition law was simply 'the last straw'. With that, the people lost all confidence in their government and subsequently in their police as well. The situation is now critical and, as noted in last week's RLPB 513 (31 July) under the sub-heading 'Poking the Dragon', 'It is urgent that this crisis be resolved.' Prayer was requested that God would open the door for the Church to take her place as peacemaker, to mediate between the protesters and the Hong Kong government.

British human rights activist and author Benedict Rogers is the East Asia Team Leader at Christian Solidarity Worldwide; he is also the co-founder and chair of Hong Kong Watch. Writing in the Union of Catholic Asian (UCA) News (2 August), Rogers condemned the governments in Hong Kong and Beijing for their 'dangerous' refusal to engage with the protesters. He likens the protests to a David versus Goliath battle and laments: 'There is a massive, unprecedented failure of governance in Hong Kong. All of this heightened tension could easily have been avoided. Hong Kong people are pragmatists, not radicals. Even the young demonstrators who stormed the Legislative Council last month protected books and antiques as they made their protest against the establishment. It would not take much to calm the situation, yet the intransigence of the Hong Kong and Beijing authorities is staggering -- and dangerous.'

As far as Rogers is concerned, there are only two ways to end the impasse: 'One is, God forbid, a Tiananmen-style crackdown, which we are already beginning to see in embryo with the police's widespread use of teargas, batons, beatings, shotgun triggers pulled, and Triad gangsters mobilised.' As Rogers warns, a PLA crackdown would result in the death not only of hundreds of Hong Kong people, but of Hong Kong itself. Some analysts doubt Beijing would be willing to risk such an outcome, considering how critical Hong Kong is to the Chinese economy. Others are not so sure, considering how loath Beijing is to give any ground to any protesters anywhere, lest it encourage protests elsewhere. The alternative,' writes Rogers, 'which is equally hard to imagine but absolutely necessary, is for the Beijing and Hong Kong governments to recognise that the only end to these protests is for some degree of democratic reform to be introduced.' Rogers is certain that if the people in Hong Kong can be persuaded that real democratic reforms will be forthcoming and their human rights and liberties safeguarded, 'then maybe there is hope for a breakthrough.' Failing that, Rogers fears that 'Hong Kong is heading for bloodshed, turmoil and tragedy on a scale it has not yet seen'.

Hong Kong's Church leaders have appealed to the Hong Kong government, urging it to take the initiative and resolve the crisis by withdrawing the extradition bill, launching an independent inquiry into police responses and commencing mediation. The Anglican Bishop of Hong Kong, Paul Kwong, has written to parishioners urging them to resist violence in all its forms, instructing them instead to 'rebuild Hong Kong through the grace of the cross, making her a "Pearl of the Orient" that can shine the glory of Christ and the radiance of humanity.' Leaders of The Vine church, an English-language church in the Wan Chai district of Hong Kong, have expressed deep concern over the escalating levels of stress and anxiety in society, noting that the crisis has driven at least five people to suicide. In its appeal for 'concerted prayer', The Vine church published a prayer for use by the citizens of Hong Kong. I have amended it slightly for international use. Please pray ...

We cry out to You for Hong Kong in its time of need. Please help those in authority to be humble and wise in their decision-making. Help those who are demonstrating to be peaceful and considerate. Please restrain all anger and frustration from creating violence and harm. We need Your intervention to bring about a resolution to this present situation of unrest.

Bring comfort to those who are anxious, fearful and confused by what they see happening around them. Lord, we ask that You listen to their cries for justice. Lord, without You this situation seems to be hopeless, so we ask for Your wisdom to prevail where human wisdom fails and political expediency takes precedence.

Show Your mighty arm of justice and righteousness in Hong Kong and bring about a peaceful outcome to rebuild that broken city.

For we do not wrestle against flesh and blood, but against the rulers, against the authorities, against the cosmic powers over this present darkness, against the spiritual forces of evil in the heavenly places. Therefore ... keep alert with all perseverance, making supplication for all the saints (from Ephesians 6:12-18 ESV).

And [David] said, "The Lord has broken through my enemies before me like a breaking flood." Therefore the name of that place is called Baal-perazim [the Lord of breaking through] (From 2 Samuel 5:17-25 ESV).

Praying for A Miracle -- Home to some 850,000 Christians (12.4 percent of the population), some 1,500 churches and 35 Bible Colleges, Hong Kong has long been a hub for Christian media and mission, providing vital support to the mainland Church and its massive missions movement. Beijing began expanding its influence in Hong Kong well before 1997, but the process has accelerated markedly under President Xi Jinping. For the Hong Kong people concerned about the erosion of freedoms, the ill-conceived extradition bill was the 'last straw'. Now at a crossroad, Hong Kong is headed for a crackdown or a breakthrough. Beijing has warned that Chinese troops will restore order if the Hong Kong authorities cannot. This would be catastrophic for the Church in Hong Kong and in mainland China. Please pray.