Please join us in 30 Days of Prayer for the Muslim World
Coinciding with Ramadan: 6 May to 4 June. https://www.30daysprayer.com/


Nothing epitomises the horror of Sri Lanka's Resurrection Sunday terror attack more than the fact that the large number of body parts collected led to many victims being counted more than once. The authorities have since revised the death toll down by 100, from 359 to 253. The traumatising horror of what many Christians saw and suffered that day is unfathomable. The greatest loss of life was inflicted in St Sebastian's church, Negombo, where more than 100 worshipers perished. By Wednesday 24 April the anger roused in Negombo could no longer be contained. Grief-stricken and angry, traumatised Christians took to the streets to drive out the city's Pakistani Muslim refugees -- newcomers, most of whom belonged to the non-violent Ahmadiyya sect deemed heretical in Pakistan. While no-one was killed, more than 600 refugees -- mostly Pakistani Ahmadiyya but also some Pakistani Christian and Afghan refugees -- were displaced. The city's 5000 native Ahmadiyya Muslims went generally unmolested, although some Muslim-owned businesses were destroyed. Christian leaders have called for calm and stressed the need to demonstrate grace and maintain openness. Sri Lankan theologian, Ajith Fernando, put forward six responses: lament loss, condemn evil, alleviate suffering, leave vengeance to the Lord, do not bear false witness (for it is an injustice 'to lump all Muslims under the category of terrorist sympathisers'), and pray (Christianity Today, 23 April 2019). The Church in Sri Lanka needs our support (e.g. financial aid for medical care) and our prayers.


On Friday 26 April authorities raided a suspected terrorist safe-house in the east coast city of Kalmunai, 44km south of Batticaloa. Inside the house were militants and family members. After a lengthy shootout, several militants blew themselves up, killing 15 of their own including six children; several more were wounded. In a second house raided nearby, police found bomb-making materials, including 150 sticks of gelignite and thousands of ball bearings to be used as shrapnel. Police reported that they were tracking down around 130 suspects identified by intelligence agencies of having links with Islamic State. One of the Easter suicide bombers -- J.M.A. Latheef, who studied in the UK and Australia, earning a degree in aeronautical engineering -- is known to have been trained by IS in Raqqa, northern Syria. So far, the authorities have reportedly detained more than 100 suspects, including foreigners from Syria and Egypt. Security officials have received intelligence indicating that further terror strikes are being planned. As is routinely the case, the suicide bombers were neither poor nor uneducated. On the contrary, they were middle and upper-middle class: two were sons of a millionaire spice merchant and at least some had earned their law and engineering degrees overseas. Their driving motivation was ideology, specifically fundamentalist Islam. 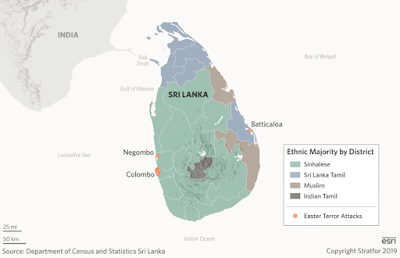 Zaharan Hashim, the terrorist ring-leader, lived and preached in the almost exclusively Muslim east coast town of Kattankudy, 9.5km south of Batticaloa. Saudi Arabia's Wahhabi clerical establishment has been investing in Kattankudy since the 1980s, building and running mosques (there are now 60 in a town with a population of 45,000) and madrassas (Islamic/Qur'anic schools), and providing locals with jobs and scholarships in Saudi Arabia where they are inevitably fully radicalised/'Wahhabised'. The growth of intolerant Wahhabi Islam has divided Sri Lankan Muslims, fuelling tensions and arousing fears. Muslims comprise ten percent of the Sri Lankan population, with fully-fledged Wahhabis estimated to comprise around one percent. Sri Lankan Muslims have been warning of the dangers since the 1990s. In 2014 a group called 'Peace Loving Moderate Muslims in Sri Lanka' published a statement in the local Daily Mirror newspaper denouncing National Towheed Jamaat (NTJ, the group that perpetrated the Easter terror attack), warning that NTJ was 'fast becoming a cancer' within Sri Lanka's Muslim community. The statement said, 'We fear that these activities, ... if left unchecked by the authorities, would create a situation in which the majority of Muslims in Sri Lanka, already under threat and harassment from this extremist minority, may have to face the wrath of other religions.'

Indeed, the danger in Sri Lanka now is that the Easter terror attacks will trigger a resurgence of violent religious nationalism among Buddhist Sinhalese (76 percent) and even among Hindu Tamils (14 percent). This would not only cause persecution to skyrocket but could return Sri Lanka to civil war. And civil war could make it so much easier for an Islamic State regional franchise to get a foothold.

* protect his precious Church from those who would bring her harm.

* strengthen the Sri Lankan Church with grace to demonstrate grace, with courage to maintain openness and with wisdom to navigate the way forward.

'Fear not, for I am with you; be not dismayed, for I am your God; I will strengthen you, I will help you, I will uphold you with my righteous right hand.' (Isaiah 41:10 ESV)

* redeem this horrific evil so that good might emerge from it: may Sri Lankans of every ethnic group and religion reject all intolerance and ethno-religious supremacy, resist incitement to violence, pursue national unity and preserve the peace.

'For as the earth brings forth its sprouts, and as a garden causes what is sown in it to sprout up, so the Lord God will cause righteousness and praise to sprout up before all the nations.' (Isaiah 61:11 ESV)

On Sunday 21 April nine Sri Lankan suicide bombers killed 253 people in three churches -- St Anthony's in Colombo, St Sebastian's in Negombo and Zion Church in Batticaloa -- and three hotels. Over 100 Christians died in St Sebastian's church. On 24 April anger overflowed in Negombo as traumatised Christians took to the streets to drive out at least 600 newcomer, mostly Ahmadiyya (non-violent Muslims) Pakistani refugees. The Church is exhorting Christians to demonstrate grace and maintain openness. On Friday 26 April Sri Lankan authorities targeted more terrorists and uncovered a huge cache of explosives as they raided terrorist safe houses in the city of Kalmunai. The bombings have rattled the Sri Lankan Church and exacerbated the nation's fragility and vulnerability. Please pray for Sri Lanka and its Christians.