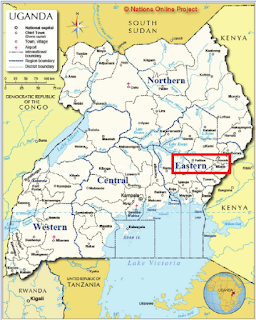 According to Uganda's 2014 census, Christians make up 84.5 percent of the population and Muslims 13.7 percent. On 24 December, the Washington Times (WT) published an article with the following headline: 'Ugandan Christians live in fear of minority Muslims on quest for conversions'.  However, the WT headline is misleading, for the pressure and persecution described in the article is taking place in Uganda's Eastern Region where Uganda's Muslims are concentrated and where Christians are a minority. The WT article retells the story of 12-year-old Emmanuel Nyaiti (see Morning Star News (MSN), October 2018) who was walking home through predominantly Muslim Kaderuna Sub-County, Budaka District, at around 9 pm when he was ambushed by four Muslims eager to force him to convert to Islam. For resisting, Nyaiti was beaten, strangled and left for dead. Nyaiti's father, Kauta Yokosofat -- a member of Kiryolo Church of Uganda -- had previously been warned that if he did not convert to Islam his family would be forced to leave the village. When Nyaiti did not arrive home, his father gathered some neighbours and set out in search. He eventually found his son unconscious and half-dead in a cassava plantation. The attack sent shock-waves through the vulnerable, minority Christian community.

Today, unprecedented numbers of Ugandan Muslims are rejecting Islam and embracing life in Jesus Christ. Eager to retain their influence and eliminate 'fitna' (the strife that comes from doubting Islam), local imams are leading efforts to crush Christian witness in Eastern Region (e.g. see MSN 30 Nov). Deborah Gimbo of Budaka Town, Budaka District, meets for prayer with two other Christian women three evenings a week. On the afternoon of 20 December, four Muslims burst into her home as she was praying alone. They warned her to stop praying aloud in Jesus' name. When Gimbo refused, the intruders beat her with sticks until neighbours came to the rescue and took the battered and bleeding woman to hospital. Gimbo, who was discharged two days later, told MSN that 'a local sheikh (teacher) had instructed the assailants that people who pray in Jesus' name should be fought and pressured until they accept only worship of Allah, or else be killed.' Previously, on 10 October, Muslims in neighbouring Kibuku District tore down a church building established by Pastor Mustafa Waseke for his congregation of converts from Islam. Pastor Waseke told MSN that the Muslims, led by an imam, razed the building while shouting, 'Allah Akbar  [Allah is the greatest], away with this church and Pastor Mustafa Waseke. No more prayers in this place, or else you will all lose your lives.' A secret believer has since informed Waseke that Muslims are plotting to kill him and his family. Pastor Waseke told MSN, 'I am at a crossroads of not knowing what to do. My church members are scattered like sheep without a shepherd ... Please pray for us.'

Muhamud Gusolo of Masaba village, Sironko District, Eastern Region, abandoned Islam and put his faith in Christ in late 2017. In October 2018 he started hosting evening Bible study and worship in his home, meeting with other former Muslims. First, his father denounced, disowned and disinherited him. Then, on 7 December, a Muslim mob, led by a mosque leader, destroyed his banana plantation. With his livelihood destroyed and his life in danger, Gusolo decided to leave the village; his wife, however, was too afraid to join him. Having lost his home, wife and six children; his parents, inheritance and livelihood; Gusolo (28) appealed to the local authorities for help. 'This,' he says, 'this has fallen on deaf ears.'

Uganda is a majority Christian country with a secular constitution that guarantees religious freedom. However, Uganda is also Africa's most decentralised country and its roughly 130 districts are largely self-governing. If the central government does not enforce the law nationwide and insist that all districts abide by the constitution, then Uganda will eventually end up like Nigeria where Muslim-majority regions observe Sharia law in defiance of the constitution to the detriment of national unity, human rights in general and Christian liberty and security in particular.

For a full analysis of the religious liberty situation in Uganda see:
'Uganda Analysis: escalating persecution of Christians in Eastern Region linked to Islamisation, decentralisation and impunity', by Elizabeth Kendal, Religious Liberty Monitoring, May 2017.

* bless the persecuted and threatened Church in Uganda's Muslim-dominated Eastern Region; may the believers have divine wisdom and grace as they navigate a deteriorating situation; may the Lord be their fortress and deliverer, comforter and provider. 'But you, O Lord, are a shield about me, my glory, and the lifter of my head.' (Psalm 3:3)

* give President Yoweri Museveni and Uganda's central government the conviction and courage to resist the Islamisation of the Eastern Region and insist that the supremacy of the constitution be recognised uniformly across all Uganda's districts.

* awaken Uganda's majority Christians to the plight of their suffering brothers and sisters in Muslim-dominated Eastern Region; may their hearts break as they see through Christ's eyes and realise the pain in the heart of God; may they fall to their knees as one for the sake of their persecuted brethren and for sake of their country.

Uganda is a predominantly Christian country with a secular constitution that guarantees religious freedom. It is also Africa's most decentralised country with some 130 districts that are largely self-governing. In Muslim-dominated Eastern Region, minority Christians are persecuted with impunity. In October, Emmanuel Nyaiti (12) was beaten, strangled and left for dead after he refused to convert to Islam; and the church building established by Pastor Mustafa Waseke for his congregation of converts was razed by a Muslim mob. In December, after losing his home, wife, children, livelihood, parents and inheritance, convert Muhamud Gusolo (28) appealed to local authorities -- but to no avail; and Deborah Gimbo was hospitalised after being violent attacked in her home for praying with other women in Jesus' name. May God intervene for Eastern Region's minority Christians.

Posted by Elizabeth Kendal. at 9:43 PM