BURMA: PERSECUTION WITH A CHINESE FLAVOUR
-- As Burma reels from Western sanctions, Beijing moves in for the kill.
by Elizabeth Kendal


Last week's RLPB 474 (September Update) noted that at least 12 churches had been destroyed or closed in Shan State's Wa region 'as of September 20'. Fresh reports reveal a level of persecution that is truly alarming. Pastor Lazaru -- a spokesman for the region's ethnic Lahu Baptist community -- told Radio Free Asia (RFA) that the United Wa State Army (UWSA) has detained 92 pastors and 'forcibly recruited 41 male and female students who were taking bible studies classes in various churches'. He also confirmed that '52 churches in the Mongpauk area have been shut down, and three have been destroyed'. Morning Star News (MSN) adds that rebel soldiers have 'removed all Christian symbols such as crosses' and closed several religious schools. According to AsiaNews, a Catholic mission run by Salesian missionary nuns has been closed and the nuns, who provided education and health care in Mong Mau (Mong Mao / Mong Maw), have been expelled. Sources report that the detained Christians have had their heads shaved and are being held in the UWSA stronghold of Mong Maw. According to Pastor Lazaru, areas under UWSA control are now closed. 'We have about 400 followers,' he said, 'and we'll pray for the quick release of our brethren who have been taken away.'

In an insightful article entitled Why China Fears Myanmar's Christians, Burma-expert Bertil Lintner reports that the United Wa State Party (UWSP) issued a statement on 9 September in Chinese, instructing all of its military officers and administrators to 'find out what the [Christian] missionaries are doing and what are their intentions'. The assumption is that Christians are a problem and missionaries pose a threat. According to The Irrawaddy, a UWSA statement issued in the Wa language on 13 September said that all churches built after 1992 would be destroyed, adding, 'We will not allow the building of new churches here anymore. Nor will we allow [Christian] organisations to accept new members.' It seems that all pastors and teachers are now under investigation, the number of churches eventually permitted to function will be limited and all Christian activity will be monitored. Only ethnic Wa will be allowed to train as religious leaders and they will be under the authority of the UWSP government.

The UWSA has its roots in the China-backed Communist Party of Burma which went to war against the central government in 1968. Today, with an estimated 40,000 personnel, the UWSA is the largest of all Burma's ethnic rebel armies. The UWSA has full authority in the unrecognised, self-governing and self-declared autonomous 'Wa State'. The Burmese government has no presence in the region, which is very Chinese. Persecution inflicted by the Burmese military generally consists of bombing, military violence, rape, murder and ethnic cleansing. The persecution in Wa region however, consists of church closures and demolitions, cross removals, mass detentions and moves to bring all religious activity under UWSA control. It is persecution with a distinctly Chinese flavour.

The Chinese Communist Party (CCP) wants peace to reign in all regions of Burma where it has 'interests', particularly in resource-rich Kachin State (where it wants to dam the Irrawaddy River) and along the route of the proposed China-Myanmar Economic Corridor (CMEC). [The CMEC will cross the Burmese border at Muse in Shan State before travelling south-west to the strategic deep water port of Kyaukpyu in western Rakhine state on the Indian Ocean.] Analysts surmise that the CCP is arming and supporting the UWSA precisely so it might leverage favours from Naypyidaw, Burma's capital. 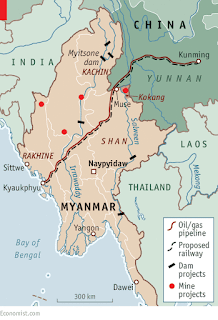 The CCP is increasing pressure on the Burmese government to recommence the Myitsone Dam project in Kachin State. The project would see vast tracts of arable Kachin land flooded, with 90 percent of hydroelectricity generated going directly to China. In an important article entitled, China is Conflicted in Myanmar's Wars, Bertil Lintner notes that Chinese weapons are flowing through to all members of the rebel seven-party alliance except the Kachin. An August 2018 report by Fortify Rights found that Chinese authorities are behind the blocking of humanitarian aid to over 100,000 displaced Christian Kachin. As Burma reels from Western sanctions, Beijing moves in for the kill. As noted in RLPB 453 (2 May), 'Nothing will stop the ethnic cleansing now.'

* intervene to reverse the situation in Burma; may greed and evil not prevail. 'For kingship belongs to the Lord, and he rules over the nations.' (Psalm 22:28 ESV)

* protect, comfort and encourage the 92 pastors and 41 students detained by the Wa army in Wa region; may the Holy Spirit give them words to speak (Matthew 10:19) and grace to shine (Philippians 2:15); may they all be released and restored to their families very soon.

* protect and preserve his precious people, abandoned by the world; may they know that the Lord is for them (Psalm 56:9) and has promised to never leave them (Matthew 28:20).

The United Wa State Army (UWSA) has its roots in the China-backed Communist Party of Burma. With some 40,000 fighters, it is the largest of Burma's ethnic armies. The UWSA rules over the unrecognised, self-governing, self-declared autonomous 'Wa State'. Analysts surmise that China is supporting the UWSA to leverage favours from Naypyidaw, Burma's capital. The Burmese government has no presence in the very Chinese Wa region. Even the persecution -- including church closures and demolitions, cross removals, mass detentions and moves to bring all religious activity under UWSA control -- has a Chinese flavour. China regards Christianity as a threat. In recent weeks the UWSA has detained 92 Christian pastors along with 41 male and female Bible students and closed more than 50 churches. Please pray for Burma and its Christians.