On Saturday 4 August Ethiopian troops swept into Jijiga, the capital of Ethiopia's 98 percent Muslim, Somali Region which is also known as Ogaden. It was supposed to be a lightning raid to apprehend the regional president, Abdi Mohamed Omar, known also as Abdi Iley. However, Abdi Iley responded by ordering regional forces, including his infamous Liyu paramilitary police, onto the streets. Clashes ensued, after which Abdi Iley supporters launched a pogrom of looting and burning specifically targeting churches and the city's ethnic non-Somalis, most of whom are ethnic Amhara (mostly Christian) and Oromo (mixed). At least 30 were killed. The regional office of the Ethiopian Human Rights Commission was also torched, resulting in the loss of documents. The EHRC believes the office was targeted specifically to impede ongoing investigations into gross human rights abuses. Then, on the afternoon of Sunday 5 August Liyu police attacked ethnic Oromos in nearby Oromia Region's Eastern Hararghe zone, killing 37 and leaving more than 44 wounded. 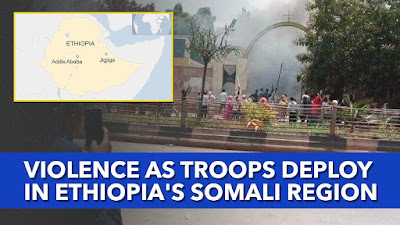 This confrontation between the central government and regional authorities had been looming since the 2 April inauguration of Dr Abiy Ahmed (41) as Prime Minister of Ethiopia. Dr Abiy's appointment was designed to end the crisis caused by two years of paralysing protests by Ethiopia's largest ethnic group, the Omoro, over the corruption, discrimination, repression, brutality and injustice that marked the 27 years of hegemony by the Tigray People's Liberation Front (TPLF). As soon as he was empowered to do so, PM Abiy Ahmed began dismantling that hegemony. Abdi Iley had been the TPLF's Somali face in Ogaden, doing the bidding of the TPLF in exchange for unfettered power, which he wielded with extreme brutality and impunity. Indeed, the names Abdi Iley and Ogaden became synonymous with corruption, repression and gross human rights abuses, including arbitrary arrests and torture.

Within weeks of PM Abiy's inauguration, an anti-Abdi Iley protest movement known as 'Barbaarta' (Somali for 'youth') was finding its voice in Jijiga, emboldened by the success of the Oromo protests. Ogaden's regional elders, too, have been urging PM Abiy to act on behalf of Somali Region's oppressed and abused peoples. On 4 July, Human Rights Watch released a report entitled 'We are like the dead', which exposed, yet again, the gross abuses in Jail Ogaden. This, it seems, was the last straw. PM Abiy asked Abdi Iley to step down; he refused. When summonsed to Addis Ababa, the tyrant stood his ground, essentially testing PM Abiy to see if he would act -- which he did.

The destruction and killings on 4-6 August are tragic and the targeted violence would have been absolutely traumatising for the Christian minority. However, the good news is that the central government of PM Abiy Ahmed has many supporters in Ogaden where the people are desperate for change. On 2 August, just prior to the government's intervention, some 500 eminent Somali elders, politicians and intellectuals gathered in Dire Dawa city (about 100km west of Jijiga) for a 'Grand Conference for Unity and Salvation' to chart a roadmap for the post-Abdi Iley era in the hope they might be able to avert a breakdown in order. On 13 August, just days after the intervention, the leadership of the Ogaden National Liberation Front (ONLF, a separatist group that has fought against the TPLF-dominated regime) returned from exile in Eritrea, declared a unilateral ceasefire, expressing their eagerness to work with the new government of PM Abiy Ahmed to stabilise the gas-rich region. Talks with the regional government are underway; the difficult work of uniting a divided people in a complex (98% Muslim) region with a troubled history is just beginning.

* bless and comfort all those left traumatised and grieving by the deadly violence in eastern Ethiopia over 4-6 August; may the Lord supply all their needs, including comforters, material aid and assistance, new 'shepherds'/priests and the means to rebuild.

* show grace towards those who perpetrated violence against his Church, by gifting them with conviction of sin and a spirit of repentance for the suffering they have brought upon their Christian neighbours; may there be true repentance, forgiveness, reconciliation and peace. 'I will build my church, and all the powers of hell will not conquer it.' (Matthew 16:18 NLT)

* redeem this traumatising situation to forge love, unity and a generous spirit among believers right across Ethiopia, especially, at this time, in Ogaden; may the Church be empowered by the Spirit of the Living God to shine as a beacon of grace, truth, healing and hope in this troubled, wounded and needy region.

* bless and use Ethiopian Prime Minister, Dr Abiy Ahmed for his good purpose; may the Lord protect him and his family from harm and may the Holy Spirit keep him humble and dependent on God for guidance, insight, discernment, wisdom and strength.

On 4 August Ethiopian troops swept into Jijiga, the capital of Ethiopia's 98 percent Muslim Somali Region (also known as Ogaden), to apprehend the regional president, Abdi Iley.  When Abdi Iley sent his own troops into the streets, clashes ensued, after which his supporters went on a rampage, looting and burning churches and targeting ethnic non-Somalis. By the time reinforcements arrived on 6 August, dozens were dead, including 15 priests. Ten Orthodox churches were burnt and nine Evangelical churches looted. A corrupt and brutal tyrant, Abdi Iley represented the old regime and was the Somali face of the ruling Tigray People's Liberation Front, doing their bidding in exchange for total power and impunity. His removal is another step towards reform. Please pray for Ethiopia, especially the Church in Ogaden.