UPDATE: Though it would have proved enormously popular with his supporter base, President Erdogan did not play the Hagia Sophia card at all. Fortunately, Erdogan also happens to be constrained by Russia, which would not tolerate the Hagia Sophia being turned into a mosque. On the contrary, Russia has repeatedly requested the cathedral be returned to the Orthodox Church, even offering to contribute funds and expertise towards its full restoration. This year Ramadan commences on 27 May, which in Turkey will be followed two days later by Conquest Day when Muslim Turks celebrate the fall of Constantinople to Ottoman forces on 29 May 1453. Hagia Sophia remains a live issue. Its conversion into a mosque would be far more than symbolic with profound implications for all Turkey's Christians. Please pray.

* INDONESIA (RLPB 401), where Basuki 'Ahok' Tjahaja Purnama has lost his bid to continue as Governor of Jakarta.

ELECTION UPDATE: Ahok (a popular and respected ethnic-Chinese Christian) had been the clear front-runner before Islamists started propagating the view that Sura 5:51 of the Qur'an teaches that Muslims must not elect non-Muslims as leaders. When Ahok made light of this, he was charged with blasphemy. This, plus several massive Islamist rallies, left Jakartans feeling intimidated and nervous. The new Governor of Jakarta is Anies Baswedan; the Islamists' choice. Ahok conceded with grace: 'Destiny is in God's hands,' he said. 'God gives power and God also takes it away.'

TRIAL UPDATE: On 20 April Chief prosecutor Ali Mukartono proposed that if Ahok is found guilty of blasphemy he should only be sentenced to two years' probation and a one-year suspended sentence. Testifying in court on 25 April, Ahok hit out at those who he claimed had propagated lies for political gain. He criticised the blasphemy law as unclear, dubious and open to exploitation.
The verdict is expected in early May.

* EGYPT (RLPB 402), where Islamic State has launched a campaign of violence against the Coptic Church. Forty-five died and many dozens were wounded on 9 April when suicide bombers struck a Coptic church in Tanta city and the Coptic Cathedral in Alexandria, where the Coptic Pope was addressing the believers. On 18 April Islamic militants failed in an attempt to breach the security at the iconic 6th Century World Heritage listed St Catherine's Monastery in South Sinai [RLPB 403].

UPDATE: A Coptic youth was found brutally slain in Quai village, Beni Suef Governorate, Upper Egypt, on Holy Thursday (13 April). It is widely believed the killing was perpetrated to 'cast terror into the hearts' (Sura 8:12) of the Copts ahead of Easter.  Allam Bashay Gabriel told World Watch Monitor that he found his son, Gamal (16), with his throat slit and lying in a pool of blood. He could not think of any reason why anyone would want to kill his son. Noting, however, that the method of killing indicated it was an Islamic ritual slaying, Mr. Gabriel believes his son was killed purely because of his faith in Jesus. Also on 13 April, three homes belonging to Copts were torched while other Copts were intimidated and their homes stoned in Kom El-Loufy, Minya Governorate. It seems the Muslims were angry that the Christians had gathered for prayer. Though there is no church in Kom El-Loufy, the 1500 Copts who live there do have permission to gather for prayer. Nobody was arrested and all other gatherings planned for Easter were cancelled because of insecurity. Pray for the Church in Egypt.

* SYRIA (RLPB 402), where Christians living, worshipping and ministering freely in government-held areas watched nervously as the US launched cruise missiles at a Syrian air-base east of Damascus. As Syria's Christians are well aware, the jihadists are close and ready to pounce should the opportunity present itself.

* KAZAKHSTAN: FINED FOR MEETING OVER EASTER 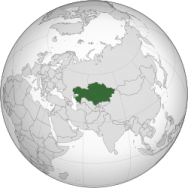 In the Central Asian state of Kazakhstan, unregistered religious activity is illegal and registration is difficult to get. A local organisation requires 50 adult male members in order to achieve registration, something virtually impossible in regional and remote areas, especially for non-Orthodox denominations. The law gives police the authority to fine groups and individuals without going through the courts. The churches raided on Easter Sunday were Baptist house churches -- one in Temirtau in the central Karaganda Region and another in Taraz in the southern Jambyl Region. The raids culminated in four Baptist leaders receiving hefty fines. Meanwhile, other Protestants had temporary bans placed on their worship and an Indian Protestant was deported. According to Forum 18, the raids are part of a 'new wave' of repression. Pray for the Church in Kazakhstan.

On the evening of Holy Saturday, 15 April, gunmen believed to be Fulani herdsmen attacked Asso village in Jema'a Local Government Area, in Kaduna State's Christian-dominated south. Shooting sporadically as they made their way through the village, the gunmen burst into a church where believers had gathered for an Easter vigil. At least 12 believers were killed and many more wounded. Though Governor Nasir Ahmad El-Rufai extended his condolences and claimed to have ramped up security, many Christians suspect he may actually be complicit.  Pray for the Church in Nigeria.

Christopher James Kalaja pastors the Agape Sanctuary International Church in Nakabale Village, Kaliro District, in Uganda's Muslim-dominated Eastern Region. Morning Star News has learned that on 27 March, a band of nine Muslims invaded Kalaja's property and, to shouts of 'Allah Akbar' (Allah is greater), hacked down the trees on his farm and tore down the church on his land. Kalaja, a married father of six, fled for his life. Though he reported the case to police, they launched an investigation only after he filed a legal case in the Budaka District Court. Kalaja has been leading the congregation of some 80 members for ten years and has been witnessing to Muslims for decades. Long the target of serious persecution, Kalaja believes the Muslims, who have already killed his mother and his livestock, are trying to drive him from the region. Uganda's radical, run-away and corruption-riddled decentralisation has left Christians in majority-Muslim districts exceedingly vulnerable to violent persecution. [An article on this is being prepared for Religious Liberty Monitoring.]