RLPB 317. RAMADAN: a time of jihad and of seeking

RAMADAN: A TIME OF JIHAD AND OF SEEKING
By Elizabeth Kendal

The last ten days of Ramadan (7-17 July this year) have special significance and are regarded as the most blessed days of the blessed month of Ramadan. They are days of particular striving and of Qur'an recitation, which fuel Islamic zeal. Unsurprisingly, the last days of Ramadan can be particularly violent as jihadists expend their pent-up frustration and whipped-up zeal in jihad for the sake of Allah. We must pray for all Christians at risk of Ramadan violence, especially those in:

* ISRAEL, where fliers purportedly from ISIS have appeared in Jerusalem, telling Christians they have until the end of Ramadan to leave, otherwise they will be slaughtered [see RLPB 316 (1 July)].
There have already been several seemingly 'lone wolf' Ramadan terror attacks against Jewish Israelis (civilians and soldiers), mostly close to the Old City.

Furthermore, ISIS has upped-the-ante in its war against Hamas, issuing a video message from Syria entitled 'A Message to our People in Jerusalem'.  In it ISIS warns Hamas they will be overrun: 'The rule of sharia [Islamic law] will be implemented in Gaza, in spite of you. We swear that what is happening in the Levant today, and in particular the Yarmouk camp [where ISIS invaded, crushed Hamas and beheaded its leaders] will happen in Gaza.' 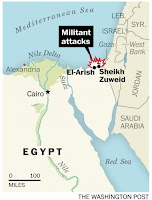 Last week ISIS fired three Grad rockets into Israel from Sinai (Egypt) and killed more than 60 Egyptian soldiers in co-ordinated attacks on 15 army and police posts close to the Israeli border (see map), raising fears that this could be the start of an ISIS offensive towards Gaza.

The danger facing Christians in Israel -- particularly in Jerusalem and Gaza -- cannot be underestimated.

* NIGERIA, where Boko Haram is escalating its jihad.
On Sunday 5 July a suicide bomber entered the Redeemed Christian Church of God (RCCG) building in the Jigawa district of Potiskum Local Government Area, Yobe State. He detonated his explosives at around 10 am as the congregation was gathering for worship. Five parishioners died at the scene while another died later in hospital. Amongst the dead were the pastor and a parishioner and her two children. Many more were seriously wounded. That night, two churches were also bombed in Jos, Plateau State. Over the same weekend 32 church buildings were destroyed in Borno State.

SOMALIA: Just prior to Ramadan, al-Shabaab ambushed an Ethiopian convoy in southern Somalia's Bay Province (north-west of Mogadishu), slaughtering more than 60 Ethiopian soldiers. Ethiopia sent reinforcements which al-Shabaab attacked with a wave of suicide bombers. The al-Shabaab spokesman boasted, 'This military feat against the foot soldiers of the Western crusaders serves as another poignant reminder to the disbelieving armies that the cost of invading Muslim lands is indeed bloody.' On 26 June al-Shabaab over-ran an African Union military base in Lego, 100 km north-west of Mogadishu, slaughtering more than 60 Burundian soldiers. About 30 June an Ethiopian military commander surrendered to al-Shabaab militants in Kansahdhere, Bay Province, promising to convert to Islam. As elsewhere, competition between ISIS and al-Shabaab (an al-Qaeda affiliate) is forcing the jihadists to be constantly escalating their attacks.

KENYA: On 7 July at 1 am, al-Shabaab militants attacked a compound housing quarry workers in north-eastern Kenya's Mandera County. Despite security being on the scene in minutes, at least 14 were killed and 11 injured. According to the al-Shabaab spokesman, Tuesday's attack, which was part of al-Shabaab's 'Ramadan offensive' against Kenya, had killed more than a dozen 'Kenyan Christians'.
[UPDATE: report from Morning Star News]

* SYRIA, where jihadist offensives threaten hundreds of thousands of Christians with genocide.

ALEPPO (north): On 2 July al-Qaeda's al-Nusra Front announced they had formed a new alliance -- Ansar al Sharia -- for the purpose of capturing Aleppo. Another coalition named 'Fatah Halab' (Conquest of Aleppo), cobbled together by regime-changers Turkey, Qatar and Saudi Arabia, is also fighting in Aleppo [see RLPB 315 (24 June)] while ISIS is waiting in the wings. Fierce fighting occurred on 3 July after al-Nusra sent suicide bombers into Jamiyat al Zahra, a neighbourhood that is home to some of the government's most important military assets in the area. Government and allied forces are having success repelling the jihadists.

DERA'A (south):  Launched on 24 June the 'Battle of Southern Storm' is supposed to culminate in a march on Damascus (Libya-style). The US-backed supposedly 'moderate' rebels in the south have recently been joined by fighters from al-Nusra and other hard-line jihadist brigades. As normally happens, these hard-liners will eventually absorb / devour the US-armed 'moderates'.

IDLIB (north): On Saturday 4 July jihadists, presumed to be from al-Nusra Front, kidnapped Franciscan priest Father Dhiya Aziz, the parish priest in the mostly Christian village of Yacoubiyeh in Idlib. His whereabouts are unknown.

UPDATE: Middle East Concern reports that Fr Dhiya was released unharmed on 9 July. [ The MEC report includes the news that four Christians have been abducted in Baghdad, Iraq.]

HASAKAH (north-east): Lest we forget, 207 Assyrian Christians (including 87 women and 37 children) remain in ISIS captivity at this highly volatile time.

On Monday 13 July Muslims around the world will participate in a night of prayer and seeking after God. Tradition has it that on the night of the 26th day of Ramadan in AD 610, Muhammad, whilst in seclusion, reputedly received his first divine revelation.

According to the Qur'an, the night of the 26th of Ramadan -- known as the 'Night of Power' (or Night of Decree) -- is 'better than a thousand months' (Sura 97:1-5), for it is believed to be a night of special power and favour when prayers are especially effectual. Concerning the Night of Power, Muhammad is recorded as having said, 'Whoever established prayers on the night of Qadr (Night of Power) out of sincere faith and hoping for a reward from Allah, then all his previous sins will be forgiven' (Bukhari vol 3, book 31, no. 125).  Consequently, many Muslims will spend the night of the 26th of Ramadan in fervent prayer, seeking after God, hoping for forgiveness of sins and anticipating divine revelation. Pray for Muslims this week, this Sunday and especially on Monday night 13 July, that those who seek God might find him. 'Seek and you will find'. (Matthew 7:7 ESV).

* our Lord and Saviour, will protect and provide for persecuted and vulnerable Christians at risk of Ramadan violence and Islamic jihad.

'Wondrously show your steadfast love, O Saviour of those who seek refuge from their adversaries at your right hand. Keep me as the apple of your eye; hide me in the shadow of your wings, from the wicked who do me violence, my deadly enemies who surround me.' (Psalm 17:7-9 ESV)

* who is King of kings and Lord of lords, 'will come with vengeance and with the recompense of God' to deliver and vindicate his people (Isaiah 35:4 ESV); may Muslims come to fear the Lord.

'So they shall fear the name of the LORD from the west, and his glory from the rising of the sun; for he will come like a rushing stream, which the wind of the LORD drives.' (Isaiah 59:19 ESV)

* the 'light of the world' will shine his light into the hearts and minds of Muslims as they seek God's favour, forgiveness and revelation on the Night of Power (13 July); may they receive the 'light of life' and walk in darkness no longer (John 8:12).


Elizabeth Kendal is the author of
Turn Back the Battle: Isaiah Speaks to Christians Today
(Deror Books, Dec 2012).