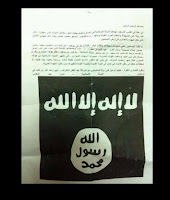 THREAT: In the last week of June Arabic fliers appeared in Jerusalem, purportedly issued by the ISIS-aligned Egyptian (Sinai-based) group Ansar al-Bayt al-Maqdis (Supporters of Jerusalem/Al-Aqsa). The fliers, which accuse Christians of 'collaborating with Zionists' and 'encouraging Muslims to leave their religion', give Christians until the end of Ramadan to flee the city -- otherwise they will be killed. 'ISIS soldiers will work to kill these people so this country is clean of them and ... will clean [purify] this country and the Muslim Quarter from these Christians during this holy Ramadan. ... So we tell our Christians and the non-believers: Go away now or you will be killed when the Eid [al Fitr festival ending Ramadan on Saturday 18 July] is near. And you will be slaughtered like the sheep. One month is enough for them to go away.' The fliers also ask that like-minded Muslims provide the group with the addresses of Christians.

CONTEXT: A serious ideological and power struggle is currently under way between ISIS (which is vehemently anti-Shi'ite) and Hamas which, like al-Qaeda and numerous other Sunni 'resistance' groups, is prepared to co-operate with Iran (leader of the Shi'ite dominated Axis of Resistance). On 1 April ISIS seized control of Yarmouk (a Palestinian area of Damascus, Syria), beheaded Hamas leaders and crushed the Hamas leadership. Hamas threatened revenge and on 6 April arrested a Salafist cleric in Gaza believed to have ties with ISIS. Then on 3 May, as tensions escalated, Hamas forces bulldozed Gaza's 'Mosque Almtahabin', which is controlled by the ISIS-aligned Ansar al-Bayt al-Maqdis (ABM), arresting seven of its leaders. ISIS/ABM responded by bombing Hamas' headquarters in Gaza and accusing Hamas of working for the Israelis.

Some observers are dismissing the ISIS/ABM leaflets as a prank aimed at intimidation, noting that Ansar al-Bayt al-Maqdis (ABM) is small and ISIS has minimal presence in Israel. Making no reference to ISIS/ABM or Christians, Palestinian authorities merely denounced any effort to hurt 'the unity of the Palestinian people'. While commentators debate the significance of the threat, ISIS/ABM has nearly three weeks to incite and organise the already radicalised Muslim youths. Set as it is in the context of the Hamas v ISIS struggle for the affection of Palestinian Arab Muslims, the threat must be taken seriously. Since ISIS has killed Coptic Christians to attract militant Egyptian Muslims and killed Ethiopian Christians to attract militant Somali Muslims, then ISIS may well facilitate the killing of Arab Christians to attract militant Palestinian Arab Muslims. This Religious Liberty Prayer Bulletin ministry is taking this threat very seriously indeed.

Before the ISIS/ABM threat even emerged, Rami Fellemon, a Palestinian Christian and director of Jerusalem Evangelistic Outreach headquartered in East Jerusalem, had told Morning Star News (MSN) that Muslim-Christian relations were breaking down and being replaced with 'a definite us versus them mentality from Islamic extremists'. This trend is being observed not only in the Palestinian-administered Territories, but in Israeli towns such as the mostly Muslim town of Nazareth where a billboard right outside the Roman Catholic Church of the Annunciation quotes Surah 4:171  threateningly warning Christians against saying God has a son.

On 1 May 2015 an imam at Jerusalem's Al-Aqsa mosque, Sheikh Issam Ameera, posted a video sermon on-line entitled 'The Islamic State is the keeper of religion and state', in which he incites Muslims to fight Jews and Christians. After a minor disagreement three days later, up to 80 Muslim youths rioted against Christians in the Christian Quarter of Jerusalem's Old City, pelting rocks at Christians' homes and attacking an Ethiopian monastery. According to MSN, whilst Muslim elders are trying to keep the peace, the youths grow more radical by the day.

With Hamas firing rockets from the south and Hezbollah building up its arsenal (estimated at over 100,000 rockets) to the north, religious tensions and anxieties are rising across Israel. Consequently, Christians are suffering attacks not only from radicalised Muslims and ISIS-sympathisers, but from Jewish ultra-nationalists as well.
MSN reports: 'Before dawn on Thursday (June 18) someone set fire to the Church of the Multiplication of the Loaves and Fishes, a Roman Catholic church run by Benedictine monks on the shore of the Sea of Galilee in Tabgha village.' The property was extensively damaged and many books lost in what police have labelled a 'religiously motivated arson attack'. Hebrew graffiti on a nearby wall read: 'Idol worshippers will be eliminated.' Sixteen Jewish youths were taken in for questioning over the incident which left an 80-year-old monk and a young German volunteer worker with injuries requiring hospitalisation. Local Christians are feeling apprehensive and insecure.

Prime Minister Benjamin Netanyahu called for a swift investigation into what he called an 'outrageous arson attack' that amounted to 'an attack on us all'. He affirmed, 'Freedom of worship in Israel is one of our core values and is guaranteed under the law. We will bring to justice those responsible for this crime. Hate and intolerance have no place in our society.' Dealing with the ISIS threat to Jerusalem's Christians could prove challenging. Any threat to Christians in Gaza, where there is no Israeli security presence, would be even more so.

* guide and assist the Israeli government and security forces, that they will protect Christians from Jewish ultra-nationalists and the far more dangerous ISIS-incited and organised militant Muslims.

* guide, assist, deliver and protect Christians in Jerusalem's Muslim Quarter, as well as in East Jerusalem and across the whole city, throughout the Palestinian-administered Territories and other Muslim-dominated regions, and in volatile towns such as Nazareth and Bethlehem.

* insert himself deep into Gaza, where there is no Israeli security presence; may Christians not be left at the mercy of Hamas, but may the Spirit of God guide and assist Christians who, in the event of an eruption of anti-Christian violence, will require hiding places and escape routes.

'God is our refuge and strength, a very present help in trouble. Therefore we will not fear though the earth gives way. ... There is a river whose streams make glad the city of God, the holy habitation of the Most High. God is in the midst of her; she shall not be moved ...' (excerpts from Psalm 46 ESV)

Arabic leaflets have appeared in Jerusalem, purportedly issued by an ISIS-aligned group, telling Christians they must flee Jerusalem by the end of Ramadan [18 July] -- otherwise they will be slaughtered. The threat comes as ISIS and Hamas engage in a struggle for the allegiance of Palestinian Muslims. Religious tensions are rising across Israel and Christians are being attacked by Jewish ultra-nationalists and radicalised Muslims, leaving some wondering if Christians have a future in Israel. The Israeli government has condemned the violence against Christians as 'an attack on us all' and affirmed Israel's commitment to religious liberty and rule of law. The ISIS threat against Christians could prove a serious challenge, especially if it extends to Gaza, with no Israeli security presence. Please pray for Israel and its Christians.