VIETNAM & CAMBODIA: NO SANCTUARY FOR DEGAR CHRISTIANS
By Elizabeth Kendal

When France ruled as the colonial power in Vietnam (1895-1954) it referred to Vietnam's indigenous hills tribes as 'Montagnards', i.e. mountaineers. At that time, some three million Montagnards, belonging to numerous tribes, lived in Vietnam's Central Highlands region. While the hill tribes refer to themselves collectively as 'Degar' (sons of the mountains), the Vietnamese refer to them as 'moi' (savages). 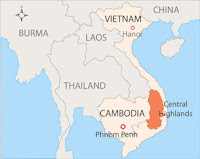 Long persecuted by the Vietnamese who covet their lands, the anti-Communist Degar fought alongside the Americans during the Vietnam War at the cost of some 200,000 Degar lives. When the Americans withdrew in 1975 and the Communists won the war, the Degar were left to face the repercussions. After decades of systematic political and religious repression and violent persecution, only a few hundred thousand predominantly Christian Degar remain. Forged in suffering, Degar Christianity is deeply infused with nationalist aspirations and a desire for justice and liberty -- all traits the paranoid and controlling Communist regime in Hanoi regards as subversive. The persecution is relentless and fuelled by racial and religious hatred.

Vietnamese state-run media vilify Degar Christianity as 'reactionary', a ‘tool of hostile forces’ and a threat to social cohesion and national security. They even claim it is not Christian at all, but 'ta dao' (evil way) religion. Persecution includes old-school communist tactics such as campaigns of extreme violence and public shaming in kangaroo courts to force Christians to renounce their faith. Refusal to renounce faith can result in imprisonment where beatings and torture are routine. A Human Rights Watch report from March 2011 entitled, 'Montagnard Christians: A Case Study in Religious Repression', contains several pages of citations from state-run media in which communist authorities boast of persuading Christian families to repent of their reactionary ways and renounce their faith. For example, 'Bao Gia Lai reports [July 2010] that 97 households in the villages of Tok and Roh, Chu Se district, "voluntarily abandon 'Dega Protestantism'" and 'Bao Gia Lai [Oct 2010]: In Chu Drang-Nay Droh commune, some 567 households related to Dega Protestantism have committed to "renouncing" the religion.'

Now a new HRW report published in June 2015 entitled 'Persecuting "Evil Way" Religion: Abuses Against Montagnards in Vietnam', confirms that the campaign of violence, torture and forced renunciations of faith continues to this day.

In October 2014 Vietnamese state-run media reported that 1758 people in Gia Lai, Dak Lak and Kon Tum Provinces had been identified as participating in 'evil way' religion in 10 districts, adding that 39 leaders were in hiding while participants continue to gather for prayers in private homes. At the same time the Cambodia Daily was reporting that Degar Christians were fleeing into Cambodia's north-eastern Ratanakkiri Province, seeking asylum in Cambodia and claiming to be fleeing increased religious and political persecution. In early May 2015 the Cambodian government deployed a further 1000 troops to the border to prevent persecuted Degar Christians from crossing into Cambodia. Because Vietnam does not want the international embarrassment of being labelled a human rights abuser, it has long requested Cambodia not recognise Degar Christians as refugees. Instead it wants them rejected as illegal migrants and repatriated. Cambodia complies to protect its close relationship with the regime in Hanoi. The West, meanwhile, ignores it all to protect its economic and geo-strategic interests in the region.

On Friday 11 September the Cambodian government gave the United Nations refugee agency (UNHCR) three months to repatriate some 200 Degar asylum seekers now living in Phnom Penh, adding that if the UNHCR cannot 'repatriate those illegal Montagnards within three months' then 'we will implement our immigration law and do it ourselves'. Cambodia suggested the UNHCR could alternatively 'find a third country for them to resettle'. Vietnam has indicated that it is 'ready to receive' the Montagnards and has assured the UNHCR that 'it will not discriminate against or punish them'. But as noted by the deputy director of Human Rights Watch's Asia division, Phil Robertson, Vietnam's assurances cannot be trusted, for Degar believers have been lured back before only to be arrested and tortured on arrival. Head of the Jesuit Refugee Service, Denise Coghlan, is appealing for the UNHCR to protect the refugees and demand that Cambodia register their cases. As she notes, many of the refugees have already 'suffered imprisonment, beatings [in Vietnam]. Many have been asked with force to sign that they will not practise their religion.' Phil Robertson (HRW) lambasted the Cambodian government, saying, 'It's outrageous that Cambodia thinks it can just force the Montagnards back into harm's way in Vietnam and no one will do anything about it.' But in reality, the persecution of Degar Christians in Vietnam and the repatriation of Degar Christian refugees from Cambodia continues year after year precisely because nobody ever does anything about it.

'Our people have lost all hope because no one cares for us any more,' lamented the president of the US-based Degar Foundation, Kok Ksor, in December 2014. 'Even the US government doesn't do anything  for us. Everyone wants to ignore us because our people are so few and our land so small. Everyone wants to help Vietnam -- and we are in the way -- because everyone wants to stop China's expansion. No one wants to say that Vietnam does anything bad,' he said.

* Cambodian Prime Minister Hun Sen will protect the Degar Christian refugees and that this crisis will shine a spotlight on one of Vietnam's darkest secrets.

* Vietnamese President Truong Tan Sang will be forced to end the repression and violent persecution of Vietnam's indigenous Degar Christians and that this crisis will shine a spotlight on Vietnam's critical decline in religious freedom.

* our gracious Lord will intervene for his precious Degar Church; may Degar Christians know his presence, comfort, provision and protection.

* the Lord intervene for religious freedom in Vietnam.

The Degar (Montagnards) are collectively the indigenous tribal people of Vietnam. Today a remnant still survives in the Central Highlands, although systematic repression and violent persecution at the hands of the Communist regime in Hanoi is threatening their very existence. Hanoi deems Degar Christianity a 'reactionary' and 'evil' religion. Those refusing to renounce their faith can expect prison and torture. Many have fled into Cambodia, which rejects them as illegal migrants and repatriates them at Vietnam's request. On 11 September the Cambodian government gave the UN refugee agency in Phnom Penh three months to repatriate some 200 Degar Christians or Cambodian security forces will do it themselves. Pray that this crisis will shine a spot-light on one of Vietnam's darkest secrets. Please pray for the Degar Christians and Vietnam and Cambodia.