Boko Haram mimics Islamic State in Syria and Iraq: seizing territory, declaring a Caliphate, taking 'infidel' women captive, telling Christians to convert to Islam or get out and rejecting borders imposed by former colonial powers. In Nigeria's north-east state of Borno, over 1.5 million Nigerians have fled Boko Haram terror. Maiduguri, the Borno state capital, now hosts over a million internally displaced persons (IDPs) more than doubling the population of the city, which is straining Maiduguri's facilities severely. There are more than 87,000 Nigerian refugees in Diffa, south-east Niger (one-sixth of the population); some 47,000 in north Cameroon's Maroua refugee camp; and when Boko Haram sacked Baga in January, killing 2,000 people, some 14,000 fled across Lake Chad into southern Chad. These IDPs and refugees are totally destitute and the communities hosting them are under immense strain. 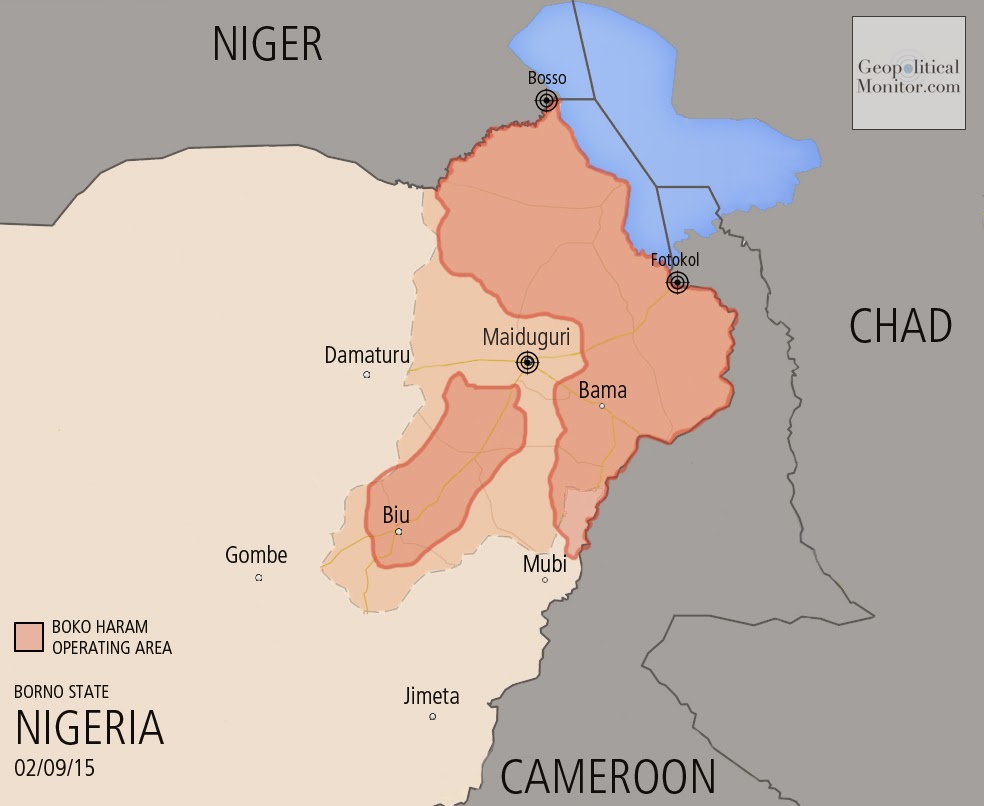 CAMEROON: On Thursday 5 February some 800 Boko Haram militants attacked the town of Fotokal, burning mosques and churches, stealing livestock and shooting villagers. More than 90 people were killed and over 500 wounded. A spokesman for the Cameroon military, Colonel Didier Badjeck, reported that Boko Haram used civilians as human shields, making it exceedingly difficult for the army to respond. Eventually the jihadists were forced back across the border.
NIGER: On Friday 6 February Boko Haram jihadists attacked the towns of Bosso and Diffa in the south-eastern corner of Niger, firing mortars into the towns from the Doutchi bridge over the Yobe River (which forms the border). A stray mortar landed in Diffa's central market, killing a child and wounding 20 local residents, six critically. The jihadists also attempted to raid the Diffa prison before the Niger Army repelled them. According to the defence minister, the battle claimed the lives of 109 militants and four Niger soldiers.

REGIONAL FORCE BEING ASSEMBLED: On Saturday 7 February, the governments of Cameroon, Chad, Niger, Nigeria and Benin agreed to establish an 8,700 strong regional force to finally dismantle Boko Haram. France has sent a reconnaissance plane and ten military advisors to Niger to assist. The regional force is expected to be ready for deployment in March.

CAMEROON: On Sunday 8 February Boko Haram jihadists attacked the village of Kerawa (where they clashed with the Cameroon Army) and the nearby town of Kolofata (where they stole food and livestock). They also hijacked a bus near the border area of Koza, driving it back towards Nigeria with some 20 captives, 12 of whom were subsequently killed after the jihadists decided to keep only the young girls.
NIGER: Early on Sunday 8 February jihadists shelled Diffa again while battling Niger soldiers on the south-eastern edge of Diffa. On 9 February jihadists who had smuggled themselves into Differ the night before attacked the prison again. The Niger government has declared a state of emergency in Diffa, thereby increasing the powers of the security forces and allowing them to search homes.

VIDEO: On 9 February Boko Haram leader Abubakar Shekau released a new video in which he mocked the plans for a regional force, saying Boko Haram would welcome the troops before picking them off one by one. Linking his jihad to the global jihad, Shekau ranted: 'We never rose up to fight Africa. We rose up to fight the world. We are going to fight the world on the principle that whoever does not obey Allah and the Prophet [must] either obey [convert] or die or become a slave [dhimmi].'

NIGERIAN POLLS POSTPONED: On Saturday 8 February Nigeria's National Security Advisor, Sambo Dasuki, urged Nigeria's Independent National Electoral Commission (INEC) to postpone the elections on the grounds the military could not provide nationwide election security while all available resources were being deployed to the north-east to fight Boko Haram. The INEC agreed and Nigeria's general elections will now be held on 28 March with gubernatorial polls on 11 April. Dasuki vowed there would be no further postponement as all known camps belonging to Boko Haram will be destroyed (supposedly) in the next six weeks. Dasuki's claim there was no political motive underlying his call for a delay has not stopped the Opposition accusing President Jonathan and the ruling PDP of postponing the polls to give themselves more time to counter the ascendency of northern Islamist presidential candidate Major General Muhammadu Buhari and their party. A legal challenge to Buhari's eligibility to contest the election will be heard in the Federal High Court in Abuja on 23 February. There is concern that northern Muslim opposition elements will use the postponement and the legal challenge as pretexts for rioting. Any insecurity can only benefit Boko Haram.

* vulnerable Christian communities across Muslim majority northern Nigeria, south-east Niger and northern Cameroon, as well as throughout Nigeria's mixed and volatile Middle Belt, will know and experience God as their refuge and strength, their very present help in trouble. (Psalm 46)

* the Lord will extend grace and mercy to the innocents and captives trapped in Boko Haram-controlled territories as this conflict unfolds, for they will certainly be exploited as human shields and targeted for 'revenge'. Pray especially for Borno's exceedingly vulnerable Christian communities, for they will be gravely imperilled. (Psalm 46)

* President Goodluck Jonathan and all other Christian leaders and lay-people across the region and  throughout the world will fall to their knees and put their faith in the Lord of hosts who alone can ensure the success of this mission to finally dismantle Boko Haram.

'And David inquired of the Lord, "Shall I go up against the Philistines? Will you give them into my hand?" And the Lord said to David, "Go up, for I will certainly give the Philistines into your hand."  And David came to Baal-perazim, and David defeated them there. And he said, "The Lord has broken through my enemies before me like a breaking flood." Therefore the name of that place is called Baal-perazim [the God who breaks through].' (From 2 Samuel 5:17-25 ESV)

An 8,700-strong regional force is being formed to finally destroy Boko Haram. Comprising troops from Nigeria, Cameroon, Chad, Niger and Benin, the force's expected deployment is in March. Boko Haram has driven some 1.5 million Nigerians from their homes, with around one million in Maiduguri (Borno capital) and some 155,000 in Niger, Chad and Cameroon where Boko Haram has escalated its attacks recently. The Nigerian elections have been postponed to 28 March and the Opposition is protesting vigorously. Concerns are that if opposition elements riot, then the insecurity will only benefit Boko Haram. Pray for the Church in Nigeria's mixed, volatile Middle Belt and for vulnerable Christian communities in the Muslim north. Please pray for the traumatised and devastated Christian communities across southern Niger and northern Cameroon. Prayer: Psalm 46.

Posted by Elizabeth Kendal. at 9:30 PM