* SUDAN (RLPB 286), where leaked documents have exposed the Arab-Islamic regime's plans to 'end the rebellion' in South Kordofan this dry season. Plans include destroying all crops and denying all aid to create a deadly famine. This is the regime's second attempted genocide of the predominantly Christian Nuba in a generation.

NUBA MOUNTAINS:  'EXTERMINATION BY DESIGN'
Fighting is raging in Dalami, in the northern regions of the Nuba Mountains, South Kordofan, and reliable sources have warned that a chemical weapons attack could be imminent. At great personal risk, researchers entered the besieged Nuba Mountains in August to assess the humanitarian situation. The report entitled 'Life Under Siege ...' was published on 20 November by 'Enough Project'. It details high levels of displacement, insecurity and malnutrition, along with extremely poor food security. 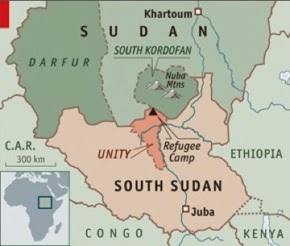 An accompanying policy brief, entitled 'Extermination by Design ...', published the same day, concludes with the following assessment: 'When considered together, the Sudan government's targeted attacks on humanitarian installations, its refusal to allow any aid workers into rebel-held areas, its aerial bombing of civilian settlements, its efforts to prevent harvesting of crops, and some of its other war tactics in the region all add up to extermination by design.'  Enough Project maintains this should be recognised as 'a crime against humanity'. Pray for the Church in South Kordofan.

KHARTOUM: CHURCH PROPERTIES DEMOLISHED
On 17 and 18 November, authorities partially demolished the Bahri Evangelical Church in North Khartoum along with homes on the church compound, including the home of pastor Hafiz Fasaha. It also included a property belonging to the Nile Theological College which was rented to a Christian doctor who has lost everything in the demolition. Leaders from the Sudan Presbyterian Evangelical Church-affiliated congregation immediately filed a complaint but were told they would have to wait until 4 December for it to be heard. When the bulldozers returned on 19 and 20 November they were met by hundreds of church members who formed a human barrier in an attempt to prevent any further demolition. Five church leaders were arrested for refusing to surrender the property to the regime. Though the church has documents proving ownership, a Muslim businessman has a court order entitling him to develop the land. Pray for the Church in Sudan.

* LAOS (RLPB 287), where Christians face great hostility at the village level. The persecution Christians suffer is endorsed and perpetuated by the authorities.

* AUSTRALIA: RELIGIOUS FREEDOM AT RISK IN VICTORIA
Victorians elect a state government on Saturday 29 November. A Labor victory would herald radical changes. Trumpeting 'Equality', the Labor platform includes the promise to remove religious exemptions from the Equal Opportunity Act (2010) so that religious organisations will no longer be permitted to employ only those who share their beliefs and values. A Labor victory would see Christians in Victoria faced with the same escalating persecution that Christians are experiencing in the UK and parts of the US where 'Equality' or 'Equal Opportunity' (pro-LGBTI 'rights') legislation is fuelling intolerance of traditional conservative Christianity. Indeed, cultural and moral relativism are increasingly being viewed as the bench-mark of Western, democratic values. Pray for revival in the West. Pray for the Victorian elections and for the Church in Victoria, Australia.

* BANGLADESH: PASTORS CHARGED
On 9 November two pastors from the Faith Bible Church of God, both converts from Islam, were sharing their faith in a meeting in Nabinagar village in the northern district of Lalmonirhat when a mob of at least 100 Muslims attacked the gathering. The police arrived and took the pastors and the 41 people at the meeting into custody. By 10 pm all but the two pastors had been released. Although Bangladesh is officially secular with a constitution that guarantees religious freedom, the two pastors were arrested and denied bail. Eventually they were released on appeal on 17 November. They are now awaiting trial on charges of hurting religious sentiments and inducing Muslims to convert. The charges were filed by local Muslim clerics. If found guilty, the pastors could face two years in jail. A hearing is scheduled for 12 December. Every ruling creates a precedent. Please pray.

On 18 November Chinese authorities arrested Peter Han (73) (left) a Korean-American Christian who, along with his wife Eunice (65), has lived in Tumen, China, since 1997, running a network of aid projects along the China-North Korea border. Born in North Korea, Mr Han had escaped as a child, lived in the US and then returned to help North Koreans. The Hans' finances have been frozen and their vehicles confiscated. Two of Peter Han's colleagues have been detained also. Now in Seoul, Eunice Han said the Chinese authorities appear to be cracking down on aid workers in the border area. According to reports, some 1000 South Korean missionaries have been driven out and churches closed.

Peter Han's arrest follows the 4 August arrest of a Canadian Christian couple, Kevin and Julie Garratt (right) who have lived in Dandong, China, since 1984, running a prayer and training centre as well as a coffee shop. According to reports, Mr Garrett (53) -- a former pastor -- and his wife are being kept isolated, without access to family or a lawyer.

* KENYA: TENSIONS BOILING
Tensions are boiling in Kenya as the government clamps down on Islamic militants and as al-Shabaab responds by slaughtering Christians. Clashes erupted in the coastal city of Mombasa on Friday 21 November as Muslims rioted in response to the government crackdown on Islamic militancy which has led to the closure of five mosques in the Mombasa area and the arrest of over 150 Muslims. The mosques -- which were being used to store weapons, bomb-making equipment and literature on jihad -- are now crime scenes. Early on Saturday 22 November some 100 al-Shabaab militants captured a bus in Kenya's far north-east. After separating the Kenyans from the Somalis, the militants then executed 28 'non-believers' (including 19 Christians) who could not recite the shahada (the Islamic profession of faith). Al-Shabaab has claimed the bus attack was retaliation for the mosque closures.

* NIGERIA: TERROR CONTINUES
Boko Haram continues to expand its Caliphate in Northern Nigeria. In a new tactic, Boko Haram militants are regularly refraining from using guns to avoid alerting the military. Instead, they attack quietly, cutting throats and drowning unsuspecting locals as they work. On Sunday 22 November a female suicide bomber blew herself up in Bauchi, killing 10 and wounding more than 60. A suicide bombing on Tuesday 25 November in Maiduguri, Borno, that has killed some 78 people, was carried out by two teenage girls.   This use of teenage girls as suicide bombers is a source of great distress for families whose daughters (mostly Christians) have been kidnapped by Boko Haram.

'Strengthen the weak hands, and make firm the feeble knees. Say to those who have an anxious heart "Be strong; fear not! Behold, your God will come with vengeance, with the recompense of God. He will come and save you."' (Isaiah 35:3-4 ESV)