KOREA: NORTH AND SOUTH TO RESUME TALKS
By Elizabeth Kendal

As was noted in RLPB 260 (14 May 2014), peace on the Korean Peninsula would facilitate improvements in living standards for North Koreans who are increasingly aware of the discrepancies between life in the North and life in the South. Back in May, when the two Koreas were trading insults and hurling belligerent rhetoric at each other, the North was escalating its crackdown on citizens found in possession of banned mobile phones and illicit materials such as magazines and DVDs from South Korea. The regime is aware that the situation is unsustainable because the trend towards openness is unstoppable. Hoping to relieve pressure from the inside, the regime is striving to improve conditions and perceptions. In the meantime, to avoid precipitating its own destruction, the regime is escalating repressive measures to ensure there is restraint on citizen anger. As noted in RLPB 248 (18 Feb 2014) this is a delicate situation that requires wise, strategic handling.

On Saturday 4 October a top-level delegation from North Korea paid South Korea a surprise visit, giving just 24 hours' notice. The 11-member delegation was led by none other than Kim Jong-Un's deputy, Hwang Pyong So. Appearing in full military uniform, Hwang is the director of the Korean People's Army and vice-chairman of the National Defense Commission which is led by Kim. Accompanying him were Kim Yang Gon, the secretary of the central committee of the Korean Workers' Party and head of the United Front Department (which deals with issues pertaining to South Korea, including unification) and another Kim confidante, Choe Ryong Hae. They were accompanied by security agents from Kim's own 'Escort Command'; dressed in dark suits with the mandatory dark sunglasses and earpieces, they were an impressive sight. The North Korean leaders came under the auspices of attending the closing ceremony of the Asian Games in Incheon, where the North won 36 medals, including 11 gold. However, they also had an amicable lunch with their South Korean counterparts, including South Korea's unification minister, Ryoo Kihl-jae, President Park's national security advisor, Kim Kwan-jin, and South Korean Prime Minister Chung Hong-won. 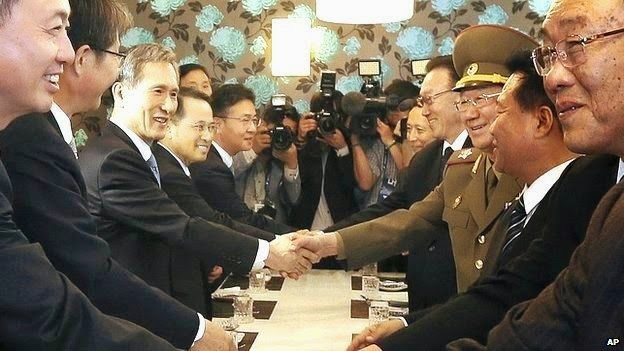 North Korea expert Andrei Lankov of Kookmin University, Seoul, remarked, 'It's a big deal, it's really a big deal, because it's completely unprecedented. ... Within my memory ... there was never ever such a high-level visit. Never! Essentially it provided a direct line to Kim Jong Un.' Another North Korea expert Mr John Delury, of Yonsei University in Seoul, agreed, saying, 'If you are [President] Park Geun Hye, and you want a credible channel to the leadership in Pyongyang, then this is your dream team.'

The regime is getting desperate, with the North clearly keen to end its isolation. On 27 September North Korean foreign minister, Ri Su Yong, addressed the United Nations General Assembly in New York, the first time a North Korean official had visited a UN meeting in 15 years. He told the Assembly that reducing tensions on the Korean Peninsula is 'more precious' to Pyongyang 'than at any time' as the North tries to boost its economy. 'The tense situation of the Korean Peninsula does not help us,' he said. 'On the contrary, it presents a serious obstacle in our effort for economic development and improved people's living standards.' The North is seeking reunification of the Korean peninsula through a 'confederation formula whereby two systems co-exist in a country'. After South Korea's President Park criticised North Korea's human rights record, the regime responded by asserting that before peace could be achieved it would be 'necessary to decisively eliminate such hordes of traitors as Park'.

It seems the South might be willing to lift the May 24 Measures under set preconditions: that the North ceases its slanderous remarks against the South, apologises for past provocations and takes significant steps toward de-nuclearisation. However, in his UN address, Ri Su Yong reiterated the regime's refusal to abandon its nuclear weapons program which it insists is necessary to deter South Korean and US 'hostility'. South Korea's Unification Minister, Ryoo Kihl-Jae, has played down talk of a sudden rapprochement, warning, 'It's not good to be overly optimistic about inter-Korean relations.' North Korea expert Bruce Klingner agrees, adding that the Korean landscape is littered with shattered hopes. More talks are being organised and are expected to be held in late October or early November.

* the Lord will continue to build and sustain his repressed and imperilled Church in North Korea; may the Holy Spirit move powerfully amongst the people: healing, saving and establishing believers at every level of society in readiness for the day of his deliverance.

* the Spirit of God will intervene powerfully in the hearts and minds of all involved, so that the next round of talks will be profitable in advancing the goal of easing the suffering of North Koreans, especially North Korean Christians who have so much to offer this desperately needy nation.

* Yahweh Sabaoth -- the Lord of Hosts -- will burst or break through his enemies (2 Samuel 5:20), bind the 'strong man' (Satan, in Matthew 12:29) and bring peace to the Korean Peninsula so that praises will yet again ring out from Pyongyang.

On Saturday 4 October a top-level delegation from North Korea visited South Korea and had lunch with their South Korean counterparts. The visit has been described by experts as 'unprecedented'. Further talks are being organised for late October or early November. The North Korean regime knows its situation is unsustainable as the trend towards openness is unstoppable. While seeking to improve conditions in the North, the regime is also escalating repression to restrain citizen anger. The visit provided propaganda for domestic consumption in the North, while also opening the way for talks aimed at getting South Korean sanctions eased. Whilst the obstacles appear insurmountable, the Lord is King and is in control. Please pray he will break through, bind the 'strong man', transform North Korea and sustain its Church.

Posted by Elizabeth Kendal. at 9:46 PM