This is the final RLPB for 2021. It includes (1) a reflection on the relationship between faith and hope; (2) a 130-word item for use in bulletins or prayers; (3) updates on Ethiopia (the TPLF retreats to Tigray), Haiti (all hostages safe and free) and Indonesia (a new blasphemy case).

The RLPB will return on 26 January with the January 2022 Update.
Thank you for your continued faithfulness.

One of my favourite historical sermons to read or listen to is Charles H. Spurgeon's January 1860 Revival Sermon on Amos 9:13. 'Behold, the days are coming,' declares the Lord, 'when the plowman shall overtake the reaper and the treader of grapes him who sows the seed; the mountains shall drip sweet wine, and all the hills shall flow with it' (ESV). 'Originally,' notes Spurgeon, 'the land of Canaan was very fertile; it was a land that flowed with milk and honey... "A land of wheat, and barley, and vines, and fig trees, and pomegranates; a land of olive oil, and honey" [from Deut 8:7-10].' So, he laments, 'It is somewhat surprising to find that now [1860] the land [then under Turkish/Ottoman rule] is barren, that its valleys are parched, and that the miserable inhabitants gather miserable harvests from the arid soil. Yet the promise still stands true, that one day... Palestine shall be as rich and fruitful as ever it was.' Difficult as this was to believe in 1860, Spurgeon was certain that our sovereign God would prove faithful. Today we stand on the other side of the temporal fulfilment of that promise; a restored Israel has indeed, 'made the desert bloom'.

As Spurgeon explains, it is normal for the promises of God to have temporal and spiritual, as well as imminent and eschatological, application. As for the spiritual application of Amos 9:13 - that is, the promise of spiritual revival - Spurgeon was certain he was witnessing the early days of something extraordinary. Revivals in Britain and Great Awakenings in America had given birth to the era of Protestant missions. Compelled by William Carey's May 1792 sermon on Isaiah 54:2-3 ['Enlarge the place of your tent . . .'], Protestants were stepping out in faith to 'expect great things from God [and] attempt great things for God!' Based on the promise of Amos 9:13, Spurgeon likewise exhorted believers to anticipate a harvest and 'exert' themselves for God.

Much has changed since Spurgeon's day! Then, most Christians lived in the Judeo-Christian West, and persecution was limited largely to the indigenous Christian peoples of the Ottoman Empire. By the year 2000, after some 200 years of Protestant missions (initially from the West, but now [since the 1960s] increasingly indigenous), most Christians live in the Muslim, Hindu, Buddhist, Shinto, traditional or atheistic non-Western world. Multitudes exist as counter-cultural religious minorities in states with appalling human rights records and little to no religious liberty, amidst escalating intolerance. The reason persecution has grown to be a global phenomenon is because Christianity has grown to be a global faith! God is fulfilling his promises!

While praying for the persecuted week after week can prove challenging, we have God's assurance given not only through the prophets but also through the angels on that first Christmas Day; the promise of 'good news of great joy which will be for all people'; the promise of 'a Saviour, who is Christ the Lord'; the promise that inspired the angels to sing: 'Glory to God in the highest, and on earth peace, goodwill toward men!' (see Luke 2:1-20 NKJV). Filled with the Holy Spirit, Zechariah prophesied the same saying, 'because of the tender mercy of our God, whereby the sunrise shall visit us from on high to give light to those who sit in darkness and in the shadow of death, to guide our feet into the way of peace.' (Luke 1:79 ESV)

Peace on earth? Are they kidding? Should I have hope for peace on earth? The word translated 'peace' here in Luke 1:79 and 2:24 is εἰρήνης (eirēnē). It can refer to either a temporal state of national tranquilly, absent rage and war; of harmony between individuals; of a state of security with prosperity; OR of a spiritual state resulting from peace with God or assurance of salvation, or even the eternal peace the believer inherits upon death [Strong's G1515]. Can we who know of the horrible persecution occurring in this world, and of the wars being waged against God's peoples, really hope for temporal peace on earth, a world not dominated by war or persecution? I can barely imagine such a thing!

In 1860, Spurgeon would have struggled to imagine the Israel that we know today. But he believed God's promise! He also believed the temporal fulfilment would prefigure the spiritual fulfilment: that of a great spiritual harvest. Dare we image a future in which churches in China and Iran are freely sending out missionaries all over the world? Dare we believe that the day may be coming when instead of Islam pressing southwards through Africa, a spiritual harvest might be reaped in Sudan, across the Sahel, and throughout West and North Africa as the Holy Spirit sweeps north unleashing revival among the Hausa, the Fulani and the Arabs? Dare we imagine a mostly Christian India or Japan or Afghanistan? Dare we trust God to be faithful to his word? 'I will build my Church, and the gates of hell shall not prevail against it' (Jesus, in Matthew 16:18 ESV).

Almighty God our Heavenly Father,
Please merciful God, increase our faith so that we will never tire of interceding for and supporting your persecuted Church as she serves you on the front line of an increasingly intense spiritual battle.

REMEMBER THE PERSECUTED THIS CHRISTMAS

For many Christians, Christmas is increasingly a time of elevated risk. This is certainly the case where fundamentalist Islam is empowered (e.g. Indonesia, Pakistan, Turkey); where Islamic jihadists are active (e.g. Egypt, Iraq, Nigeria, Mozambique); where Hindu or Buddhist nationalism is ascendant (e.g. India, Nepal, Sri-Lanka, Burma/Myanmar); where terrorism is escalating (e.g. Burkina Faso and the wider Sahel; Ethiopia and the Horn of Africa); and where hostile totalitarian regimes hold power (e.g. China, Vietnam, Iran). Meanwhile, in the world's churchless dark corners - Saudi Arabia, North Korea, Afghanistan, Tibet, Somalia - secret Christians will acknowledge Christmas quietly with trusted contacts over safe channels. For them and the many Christians currently in prison, there will be no singing, no gathering and no celebration - except in the heart. Please remember to pray for the persecuted.

ETHIOPIA: TPLF RETREATS TO TIGRAY AND APPEALS FOR CEASEFIRE
-- Praise God who has turned back the battle in answer to prayer!

The head of the Tigray People's Liberation Front (TPLF), Debretsion Gebremichael, has written to the United Nations explaining that he has ordered all units of the Tigray Defence Force outside of the borders of Tigray to withdraw to Tigray. As the TPLF retreats it leaves in its wake 'a trail of abuse', including a multitude of displaced and massacred civilians, looted aid warehouses and vandalised empty hospitals. But this conflict was always about much more than TPLF ambitions. Foreign elements want to weaken, divide, and rule Ethiopia (by proxy [the TPLF]) so they can dominate the Horn of Africa and the Red Sea Region. But as RLPB has pointed out repeatedly from the outset, the collapse of Ethiopia would trigger a Christian crisis of monumental proportions. Please continue to pray that God will fulfil all his purposes for Ethiopia.

'The Lord will fulfil his purpose for me; your steadfast love, O Lord, endures forever. Do not forsake the work of your hands' (Psalm 138:8 ESV).

Founded in 1981, Ohio-based Christian Aid Ministries (CAM) describes itself as 'a foreign-aid outlet for Amish and Mennonite and other conservative Anabaptist groups and individuals to minister to physical and spiritual needs around the world.' On 9 October a criminal gang seized 16 American and one Canadian CAM missionaries/supporters in Haiti, where they had been visiting a CAM-run orphanage. The gang demanded one million US dollars ransom per captive and threatened to kill them if it was not forthcoming [see RLPB 621 (27 Oct)]. Two missionaries were released on 21 November and three more were released two weeks later. Then, on the night of 15 December, the remaining 12 hostages made a daring night-time escape, walking for hours in the dark over rugged terrain until the dawn when they approached someone who phoned for help. On 20 December, under a banner declaring, 'Praise God for answered prayers', CAM General Director David Troyer gave a press conference, rich in gracious thankfulness, announcing the safe return of all 17 hostages. Praise God and continue to pray that Haiti will be delivered of its spiritual darkness.

Over the course of five years, Herry Wirawan, the principal of a girls-only Islamic boarding school in Bandung, West Java, raped at least 12 of the young girls under his charge. Of the 12 known victims (all minors), nine have given birth and two are in an advanced stage of pregnancy. The case against Wirawan (36) is being heard in the Bandung District Court. Since around 10 December, when news of the case became public, public outrage has exploded. Then, on 14 December, Indonesian police arrested Joseph Suryadi (39), a Christian from Tangerang (a city near Jakarta) and charged him with blasphemy. Joseph stands accused of uploading a caricature of Islam's prophet Muhammad with a young, veiled girl (representing his prepubescent child-wife Aisha), along with a message noting that, just like Herry Wirawan, Muhammad too had a penchant for young girls. The post quickly attracted more than 7000 complaints. Suryadi denies uploading the message, insisting it happened while his phone was missing. If found guilty, Suryadi faces five years in a very hostile prison simply for giving public expression to one of Islam's most enduring stains: that Muhammad (aged 53) married Aisha when she was six years old and consummated the marriage when she was nine. Please pray.

[Indonesia's Criminal Code, Article 156 (a) reads: 'By a maximum imprisonment of five years shall be punished any person who deliberately in public gives expression to feelings or commits an act. (a) which principally have the character of being at enmity with, abusing or staining a religion, adhered to in Indonesia.'] 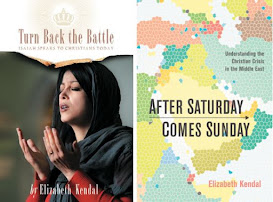 Elizabeth Kendal is an international religious liberty analyst and advocate. She serves as Director of Research at Canberra-based Christian Faith and Freedom Inc (CFF) and is an Adjunct Research Fellow at the Arthur Jeffery Centre for the Study of Islam at Melbourne School of Theology.

Posted by Elizabeth Kendal. at 9:58 PM