THE SAHEL: AFRICA'S AFGHANISTAN? CHRISTIANS IMPERILLED.
- PLUS Pressing South: from the Sahel to the Gulf of Guinea
by Elizabeth Kendal 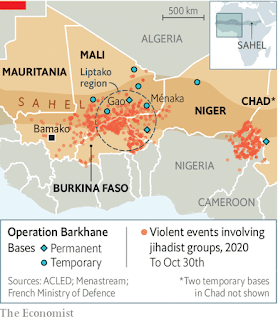 In 2013, French troops entered the Sahel to counter Islamic jihadists who, in 2012, had seized control of Northern Mali in a blitzkrieg. Since 2014, some 5100 French troops have served alongside soldiers from Burkina Faso, Chad, Mali, Mauritania and Niger in what has been known as Operation Barkhane. French policy was to hold off the jihadis while African states developed the capacity to defend their own territories. Operation Barkhane has been hugely unpopular in France, where citizens have questioned why French money should be spent and French lives lost (albeit very few) defending France's former colonies in Africa. Making matters worse, with troop numbers insufficient for the task, Operation Barkhane has not been successful. Instead, jihadists groups have both proliferated and grown stronger, while impoverished Sahelian armies remain ill-equipped and hopelessly overstretched.

At a press conference on 10 June, French President Emmanuel Macron announced that Operation Barkhane will officially end in the first quarter of 2022; an orderly withdrawal has already begun. Some 2000 French troops will join Task Force Takuba, a recently established European Union force that will advise and assist African forces in their counter-terror operations. Troops will arrive home just in time for the French presidential election, scheduled for 10 April 2022. It comes at a time when jihadists are: (1) escalating activity to record levels; (2) enforcing Sharia law and implementing Sharia penalties in territories they control; and (3) actively working to expand south towards the Gulf of Guinea. Christians in the Sahel - especially those in the Liptako-Gourma [Mali, Burkina Faso, Niger tri-border] region - are imminently imperilled.

Like Mali and Niger, Burkina Faso is majority Muslim (52 percent Muslim and 21 percent Christian), with a proud tradition of religious freedom and social cohesion. Today, jihadist violence is escalating markedly, specifically in the Liptako-Gourma / tri-border region. The situation is particularly severe in Burkina Faso, which has suffered seven major attacks in quick succession since the beginning of April. On Friday night 4 June, jihadist gunmen on motorbikes killed 13 civilians and a soldier in Tadaryat, a village in Sahel Region's Yagha Province which borders Niger in north-eastern Burkina Faso. Hours later, at around 2am on 5 June, the jihadists attacked Solhan Village, around 150 km further south. In a shocking explosion of violence, the jihadists - including 'young people aged 12 to 14' - massacred at least 160 civilians, including 20 children, leaving 40 wounded. They stole motorbikes and cattle and torched homes and a market. It was the worst massacre in Burkina Faso's six-year battle against Islamic jihadists. No group has claimed responsibility, although analysts suspect Islamic State in the Greater Sahara (ISGS) is to blame.

Speaking to Aid to the Church in Need (ACN, 11 June), Bishop Laurent Dabiré of Dori (the capital of Burkina Faso's northern Sahel Region) described Solhan as 'a vibrant Christian community'. The Bishop said: 'Just like everyone else in Burkina who is being targeted by terrorism, the Christians were overcome by fear. However, as Christians, they have more reason to fear a forced imposition of Islam. Their religious freedom and even their lives are at stake.' Solhan Village had recently established a Volunteers for the Defense of the Fatherland (VDP) corps, an anti-jihadist civilian defence militia that co-operates with the government to protect communities. Jihadists have long held vast swathes of gold-rich eastern Burkina Faso, leading some to surmise the massacre was a case of jihadists punishing Solhan for its VDP while reasserting their supremacy over the region. Whilst they have long demanded Muslims submit to fundamentalist Islam, there are concerns that jihadists in eastern Burkina Faso are widening their scope to include Christians. A regional Bible school has been targeted, its library burned and its staff and students threatened. Please pray.

PRESSING SOUTH: From the Sahel to the Gulf of Guinea

In February, France's head of foreign intelligence warned that terrorists based in the Sahel are actively working on expanding into the countries of the Gulf of Guinea - specifically Ivory Coast, Ghana, Togo and Benin, all of which border Burkina Faso. For supply and income, jihadists partner with organised crime to conduct illicit trade in weapons, drugs, gold, cattle, fuel etc. Consequently, the jihadists are eager to secure their supply lines and smuggling routes, many of which transit through Gulf of Guinea states. Ivory Coast has seen a 'stark increase' in terror attacks this year, with nine attacks since 29 March (up from one in 2020), predominantly in the northern districts of Savanes and Zanzan. Jihadist violence has also begun to spill over into northern Benin, where five jihadist cells are known to have a presence on the border. Responding to the escalating threat, Togo and Ghana have increased security along their northern borders.

On 21 June a suicide bomber named Abu Dujana, from al-Qaeda affiliate Jama'at Nasr al-Islam wal Muslimin (JNIM: Group for the Support of Islam and Muslims), attacked a French reconnaissance mission near the central Malian town of Gossi, wounding six soldiers and four civilians. In his martyrdom video, Abu Dujana - a Fulani reportedly from Tamale, the capital of Ghana's Northern Region - urged his Fulani kinsmen to rise up and fight those who fight them.

* draw the churches of Mali, Burkina Faso and Niger into prayer, that religious freedom and social cohesion might be not merely preserved but promoted, respected and treasured; may the Lord redeem this crisis to amplify the Gospel message, magnify Christian witness, and open many hearts to receive Jesus Christ, the hope of nations (see Matthew 12:14-21).

France's Operation Barkhane, tasked with fighting terrorism in the Sahel, will come to an end in early 2022, just ahead of France's presidential election. Troops are already being withdrawn. It comes as jihadists in the Sahel are: (1) escalating their activity; (2) enacting Sharia laws and penalties in territories they control; and (3) actively working to expand south into Ivory Coast, Ghana, Togo and Benin. On the night of 4-5 June, Islamic jihadists - many of whom were mere children - massacred at least 160 civilians in Solhan Village, Yagha Region, north-eastern Burkina Faso. Separately, jihadists in eastern Burkina Faso have targeted a Bible school, burning its library and threatening its staff. Christians in the Sahel - especially those in the Mali, Burkina Faso, Niger tri-border region - are imminently imperilled. Please pray.

Elizabeth Kendal is an international religious liberty analyst and advocate. She serves as Director of Advocacy at Canberra-based Christian Faith and Freedom Inc. (CFF) and is an Adjunct Research Fellow at the Arthur Jeffery Centre for the Study of Islam at Melbourne School of Theology.