Please forward this prayer bulletin widely, and encourage others to sign up to the Religious Liberty Prayer Bulletin (RLPB) blog. "The prayer of a righteous person is powerful and effective." (James 5:16 NIV)

CONTEXT: Located between the Black and Caspian Seas, the Caucasus states sit on a volatile, geo-strategic, ethnic religious fault-line between three powers: Turkey, Iran and Russia. Over recent decades, oil and gas pipeline politics has caused the strategic and economic value of these states to skyrocket. Should war erupt in the South Caucasus (specifically between Armenians and Azerbaijan) it would be likely to take on regional dimensions, with Russia backing Armenia, and Turkey backing Azerbaijan.

BACKGROUND: In 1915 some 1.5 million Armenians were slaughtered and starved to death in the Armenian Genocide. Many thousands more were expelled or forcibly Islamised and 'Turkified' as Turkish ultra-nationalists incited ethnic-religious cleansing to rid the Anatolian Peninsula of non-Turks. In May 1918 the newly independent state of Armenia was declared, alongside the newly independent state of Azerbaijan. Although Nagorno-Karabakh (N-K) was historically, culturally and demographically Armenian (94.5 percent), Azerbaijan claimed the mountainous territory as its own. War erupted. Exploiting the chaos, the Soviets invaded and annexed the region, dividing it between the Soviet Republic of Armenia and the Soviet Republic of Azerbaijan.

To compensate Armenia for its massive territorial losses -- specifically the loss of Western Armenia to Turkey -- N-K was awarded to Armenia. However, when Turkic Azeri communists protested, Stalin stepped in. In 1923, to appease both Turks and Communists, he handed N-K (Armenian Christian) to Azerbaijan (Turkic Muslim), with N-K having the status of an autonomous oblast (province). For decades, ethnic-religious tensions were suppressed due to Soviet Communist repression.
In the 1980s glastnost (openness) and perestroika (restructuring) converged with Islamic revival to awaken Islamic identity and to fuel Islamic zeal. In 1990 the Soviet empire unravelled and Armenia declared independence. When Azerbaijan declared independence in 1991 it immediately abolished the N-K autonomous oblast. Horrified, N-K's Armenian Christians held a referendum on self-determination in which 99 percent of voters supported independence. Azerbaijan responded by launching a war of ethnic cleansing against Armenian 'separatists' and 'occupiers'. By 1993 Azerbaijan -- then a terror hub servicing the Chechen War -- had incorporated some 2000 Chechen and Afghan jihadis into its armed forces to fight the Armenian Christians. 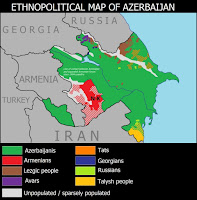 Despite overwhelming odds, the N-K Armenians not only prevailed but occupied some 20 percent of Azerbaijan so as to create a buffer zone around N-K to protect civilians from shelling. In 1994 a ceasefire froze the conflict. While Azerbaijan insists that N-K is its territory, the Armenians of N-K would rather die fighting than surrender their historic Christian homeland to Turkic Muslims whom history has taught them not to trust.

CRISIS: While border clashes have flared routinely over the years, the fighting that erupted on Saturday 2 April was different. Just one day after Azerbaijan's President Ilham Aliyev and US Vice-President Joe Biden met for talks in Washington, it was the worst violence since 1994. Today, as Azerbaijan states its willingness to 'liberate' N-K militarily, it is receiving loud support from neo-Ottoman Turkey. The US too -- being heavily invested in oil-rich Azerbaijan -- has declared its support for Azerbaijan's 'territorial integrity', while asserting that the status quo is unacceptable.

So in attacking and provoking N-K now, what might Azerbaijan be hoping to achieve? Is Baku threatening to trigger a regional conflict: drawing in neo-Ottoman Turkey (to support Turkic Azerbaijan) and then Armenia (to support N-K); Russia (to support Armenia); the US (to protect its considerable economic interests in Baku); and transnational jihadis -- all in the hope of effecting a final solution on N-K and even possibly on Armenia itself? Such a scenario represents a pan-Turkist's dream and an Armenian's nightmare. Fighting has died down since a ceasefire was declared on 5 April, but tensions are soaring and the situation is highly volatile.

* expose lies, propaganda, greed and megalomania for what they are: sins that give the devil a foothold to bring darkness, chaos and devastation to the earth, and great suffering to God's people; may all such evil be recognised and rejected and justice prevail.

* draw Armenians and indeed all Christians into prayer, so they might put their trust not in weapons, not in defences, and not in humanity, but in the Lord their God who has promised that, when exalted and honoured, he will be 'strength to those who turn back the battle at the gate' (Isaiah 28:5-6).

* intervene for the sake of his people, so that all things might work together for the good of those who love him, according to his good purpose. (Romans 8:28)

Situated between Turkey, Iran and Russia, the Caucasus sits on a geo-strategic, ethnic-religious fault-line. Despite being historically, demographically and culturally Armenian and Christian, the region of Nagorno-Karabakh (N-K) is claimed by Azerbaijan (Turkic Muslim). In 1923 Stalin awarded the region to Azerbaijan in a move to appease Turks and Azeri Communists. In 1991 the Soviet Union unravelled and war erupted over N-K. The N-K Armenians prevailed despite overwhelming odds, retaining their autonomy and establishing a buffer zone to protect civilians from shelling. In 1994 a ceasefire froze the conflict. The violence which erupted on 2 April was the worst violence since 1994. A ceasefire was declared on 5 April and fighting has subsided, but tensions are soaring and the situation is highly volatile. Please pray for the Armenian Christians of Nagorno-Karabakh.

Elizabeth Kendal is the author of Turn Back the Battle: Isaiah Speaks to Christians Today (Deror Books, Dec 2012) which presents a Biblical response to persecution and existential threat.

Elizabeth Kendal’s new book, After Saturday Comes Sunday: Understanding the Christian Crisis in the Middle East, is presently being published by Wipf and Stock (Eugene, OR, USA) and will be available shortly.