RLPB 255. The Chinese Communist Party and the Cross over Zhejiang

CHINA: THE CHINESE COMMUNIST PARTY AND THE CROSS
By Elizabeth Kendal

With a population of some 10 million, Wenzhou, in China's eastern Zhejiang Province, is one of China's great coastal megacities. A 480km drive south of Shanghai on the East China Sea, Wenzhou is often referred to as 'China's Jerusalem' as it is believed to have the largest Christian population of any city in China -- possibly as high as 30 percent. Wenzhou is a business hub known for its many successful Christian entrepreneurs who actively promote Christianity in their workplaces. Whilst the Christian entrepreneurs do strive to maintain good relations with local authorities, that they hold considerable economic power in Wenzhou is doubtless one reason why the churches seem able to be quite active. According to China expert, Dr Kurt Selles, Wenzhou has some 1800 churches which operate openly despite most not being registered with the government. For more than a decade, the success of Wenzhou's Christianity-infused businesses has aroused government interest in the link between Protestant Christianity and successful capitalism. [See below for related articles.] This demonstrable link has created a dilemma for the Chinese Communist Party (CCP) which is keen to exploit any business model that generates wealth, yet believes it must rein in and control Christianity lest it undermine Communist Party authority.

On 8 January 2014 Zhejiang's Communist Party secretary, Xia Baolong, was conducting an inspection in Zhoushan (north-east Zhejiang) and was shocked by the proliferation of large churches. While passing a church in Baiquan town, Xia reportedly objected that the cross atop the church was 'too conspicuous', and demanded that the local Religious Affairs Bureau 'rectify' the problem by removing it. The CCP might want to reap the benefits of Christianity, but it certainly does not want the Church to grow! And so began a campaign to de-Christianise the landscapes and skylines of Zhejiang.

On 27 February officials from the Zhoushan Religious Affairs Bureau demanded that believers at the government sanctioned church in Baiquan, Zhoushan, help tear down the cross on top of their building. The Christians refused and a stand-off ensued. 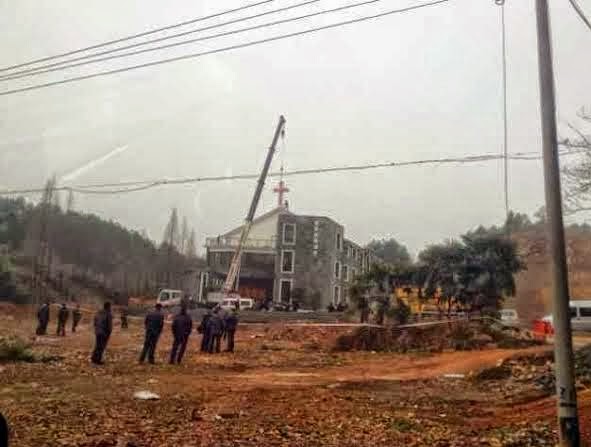 The cross on a government sanctioned church in the Yuhang Disctict of Hangzhou (Zhejiang's provincial capital) was forcibly removed on the same day after the authorities deemed it 'too conspicuous'. Two other local churches reportedly had their crosses forcibly removed also that day. Believers told ChinaAid that forced cross removals were also taking place in neighbouring Anhui Province as well.  (Photos: China Aid Association)

At eight storeys tall and covering 1000 square metres, Sanjiang church in Wenzhou's Ou Bei township is large by any standards. The building includes spaces for worship, teaching and accommodating the elderly. The church is registered with the authorities and is part of the government-controlled Three Self Patriotic Movement (TSPM). The members, along with many relatives working overseas, raised the US$4.8 million for the construction. Everything was approved by the Wenzhou municipal government, which designated the church a 'model project' in September 2013. When the Christians refused to remove the cross and several spires from the rooftop, the authorities responded by threatening to demolish the entire building, falsely accusing the church of adding illegal structures in violation of building codes that rendered it structurally unsound. Meanwhile, demolition notices were reportedly also sent to churches in Taishun, Wencheng and Ruian townships. A church in Yongjia County also is understood to have been ordered to remove its cross and the top floor of the church.

On 25 March members of Sanjiang church commenced a protest and on 3 April the pastors were notified that the church would be demolished within 15 days: i.e. by 18 April (Good Friday). Since then some 5000 local Christians have been participating in round-the-clock prayer vigils and sit-ins, praying that the church might be saved from demolition. He Hongying (81) said she would stay in the church day and night for as long as necessary. 'We feel at peace,' she said, 'and fearless when we are with our God'.

The struggle for Sanjiang church has come to represent the struggle between Chinese Christians who are unashamed of the transformative power of the Gospel, and abusive CCP officials who love money and despise the Cross.

Remember: 'we do not wrestle against flesh and blood, but against the rulers, against the authorities, against the cosmic powers over this present darkness, against the spiritual forces of evil in the heavenly places. Therefore take up the whole armour of God, that you may be able to withstand in the evil day, and having done all, to stand firm.' (Ephesians 6:12-13 ESV)

* use the crisis at the Sanjiang church to open the eyes and ears of multitudes of Chinese, locally, nationally and inside the CCP; may they believe what the Church has been showing -- that Christianity is good not only for business, but for families and all of society, because Jesus cleanses from sin, the Holy Spirit enables righteousness, and God's wisdom is truth!

* raise up voices for justice across Wenzhou and throughout Zhejiang, so that CCP officials will be forced to relent and stop abusing their power to attack the churches.

* protect and bless all those believers who are risking their security and liberty to stand for their right to lift up the Cross of Christ as the hope of the nation; may the Lord hear their prayers and bring revival to Zhejiang.

Wenzhou, in China's eastern Zhejiang Province, is a coastal megacity of some 10 million residents. Known as 'China's Jerusalem', it is home to as many as three million Christians. They include many Christian entrepreneurs. Objecting to the 'conspicuous' nature of large crosses atop many large churches, Zhejiang's Communist Party secretary recently demanded that authorities 'rectify' the situation by removing the crosses. The campaign to de-Christianise landscapes and skylines across Zhejiang is coming to a head in Wenzhou where a major stand-off is under way at the eight-storey, 1000 square metre Sanjiang church. When the church refused to remove its cross and spires, authorities ordered the church's demolition. Some 5000 local Christians are participating in prayer vigils and sit-ins, day and night, to prevent demolition. Please join them in prayer.

Elizabeth Kendal is the author of
Turn Back the Battle: Isaiah speaks to Christians today
(Deror Books, Dec 2012)
Posted by Elizabeth Kendal. at 11:56 PM